A creek runs through the spot near Olsen and Robinson Park roads east of Moscow. A tree and a spiky bush sit off in the distance. Aaron Johnson has been there many times. Being a plein air oil and watercolor painter, his office is outdoors. 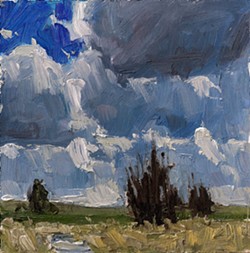 “I have an easel that I set up and I paint them — then and there,” he said. “I take liberties in what I’m painting, so although it may be a specific site, I want it to feel like a place, more than it necessarily needs to look like it.”

Some places Johnson has visited up to 30 times — on different days, in different seasons or during different years. He doesn’t want an exact replica each time he visits, and he doesn’t want viewers to be able to hold up a photograph, matching the view.

“So I’m not a slave to the space,” Johnson said. “If something doesn’t add to the dynamics of the painting, then I will eliminate that.”

He’ll move bushes or clouds around a bit. And while he is not a fan of the heat, he paints both winter- and summer-scapes.

“I go out and paint when it’s 10 degrees below,” he said. “I like the feel of the painting, because it’s stiffer, well, because it’s cold.”

The viscosity of the paint is thicker, he said.

And with summer comes blue skies, but Johnson would rather stick to clouds.

“I have a friend who calls me a drama painter because I don’t like to paint blue skies,” he said. “I’m the painting equivalent of a tornado chaser. So, if there’s big, scary clouds outside, I think ‘Oh, I’m gonna go paint ‘em.’"

“There’s always an opportunity for a mistake to happen and you just roll with it and it enhances the experience, because it’s part of the performance,” he said.

So when there’s dirt, snow or a bug in the painting, he’ll keep it that way.

“I’m interested in that familiarity of a place and going and experiencing it,” he said.

Johnson grew up in an artistic family.

“My father was a watercolorist, a painter and a high school art teacher, so art has been a part of my life,” he said.

After receiving a bachelor’s degree at Portland’s Pacific Northwest College of Art, he attended the University of Idaho for a graduate degree and was adjunct faculty last semester, teaching history of design. Next semester, he will teach art at Lewis-Clark State College.

“(Art has) just always been what I wanted to do and what I was passionate about and what interested me,” Johnson said. “I can’t see myself doing anything else.”

Johnson’s passion led him to submit an oil piece, “Afternoon Clouds,” for Moscow Artwalk’s cover design competition, which was then selected with the help of Kathleen Burns, Moscow art director.

Johnson’s oil and watercolor paintings will be on display during Moscow Artwalk at the Third Street Gallery inside Moscow City Hall, with a reception  5-7 p.m. Friday. Some of his pieces will be for sale.

“I like paintings to be approachable,” Johnson said. “I still need to be able to support my family with it, but if somebody likes a painting and it’s small and it’s portable, then I think it’s important for people to get that. Having good paint art isn’t just for the wealthy.”

Johnson’s permanent studio is inside the Turnspace Studio at 129 W. Third St. in Moscow, where his work is on display between shows.