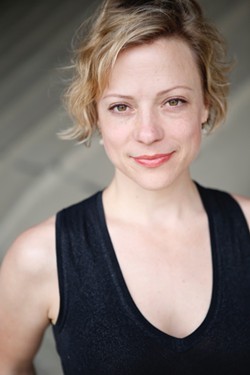 Faces from the Lewiston Civic Theatre’s past are planning a return for the theater’s annual Fine Arts Gala featuring the “Best of Broadway.” The event March 3 at Lindsay Creek Vineyards features Katherine Strohmaier and Aaron Lamb, singing some of their favorite songs from the musical theater canon.

“They’re songs we love to sing, songs from shows we’ve done together and songs we know are well-loved by musical theater fans,” said Strohmaier, who lives in Seattle where she works as a music director, conductor and adjunct professor at Cornish College of the Arts.

Strohmaier discovered her love for the stage as a youth at the Lewiston theater, where she starred in shows like “Bye Bye Birdie” and “Fiddler on the Roof.” She often shared the spotlight with Lamb, a Pullman native who came to the Lewiston stage in 1992. Lamb also lives in Seattle, where he works as a web applications developer at the University of Washington while juggling multiple stage and directing contracts. He is the artistic director of Harlequin Productions. Last fall, the two starred together in the off-Broadway musical “The Last Five Years” at Taproot Theatre in Seattle.

The gala is the theater’s biggest, and really only, fundraiser of the year, said Nancy McIntosh, executive director. One of the misconceptions the theater has dealt with since deeding its condemned building to the city in 2017 is the perception that it no longer exists, said McIntosh.

While finding venues to perform in has been a challenge, “the hardest thing is figuring out how to get the community to support the theater,” she said.

Shows can cost between $10,000 and $15,000 to produce, and the group puts on five a year. The theater recently received an anonymous $10,000 donation, McIntosh said. Right now the group exists from show to show and is seeking business sponsors to support the upcoming season. “If we can get some support from the community, and if they see that the performing arts are important to the quality of life in the valley, we’ll move forward,” she said. “Professional people who move to the valley look for this.”

Besides a dedicated core of adult volunteers, the theater’s youth company, Acting Out, has 24 members from fourth grade through high school, she said. The theater is looking for teachers -- anyone from actors to education majors -- to help offer workshops for the group, she said.

Tickets for the gala must be reserved by Feb. 27. There will be no admission at the door. A cocktail hour starts at 5 p.m., with a buffet dinner by Happy Day Catering at 6:30 and the performance at 7:30. The theater will also reveal its 2018-19 season shows that evening.

OF NOTE: Reservations are due by Feb. 27 and can be made by contacting the theater box office at (208) 746-3401. The event will include silent and live auctions, drawings, dinner and free rides home. Two drink tickets are included with admission. Wine and beer will be for sale.