Birthing a holiday classic: Moscow doula doubles as director for ‘The Man Who Came to Dinner’ 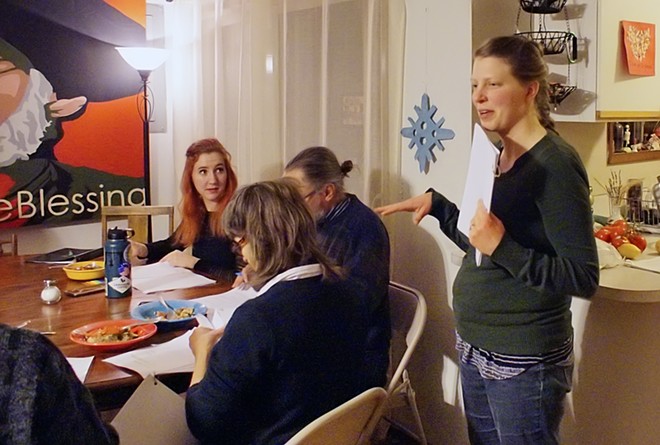 The Moscow Community Theatre will celebrate the holidays with the radio play adaption of the 1939 comedy “The Man Who Came To Dinner,” written by George S. Kaufman and Moss Hart.

When an arrogant radio personality on a speaking tour in Ohio injures himself, he becomes an unexpected house guest for a well-known family in the area. The one-night show is directed by Rebecca Haley, a Moscow resident and longtime director. Inland 360 found out more.

What do you do for a living when not working with the theater?

Haley: I have the privilege of serving families on the Palouse and Lewiston-Clarkston Valley as a birth and postpartum doula through my business, Palouse Women’s Wellness. While being a doula and theater-maker may not seem like they have a lot in common, both of these spheres invite me to bring a calm and joy-filled presence to larger-than-life situations, to adapt to the unexpected with grace and to hold space for people to live authentically in the moment.

What is your past experience directing?

Haley: I directed scenes for classes and assistant-directed a full-length play with University of Idaho Professor David Lee-Painter (who is playing Sheridan Whiteside in “The Man Who Came to Dinner”) while getting my undergraduate degree in theatre at the UI. I also acted and directed for Missoula Children's Theatre for a season. I stepped away from theater to give focus to other areas of my life, but I am very excited to get another opportunity with this show.

Why did you want to direct this play?

Haley: Ari Burns, the producer and Foley sound engineer, asked me if I wanted to direct this show. I enjoyed getting to know Ari a bit when my husband, Daniel Haley, performed in the production of her original play, “The Three Keys of Captain Hellfire,” this past spring. Ari seems to bring a lot of passion to her projects, so I thought it might be fun to work with her on “The Man Who Came to Dinner.” I was right.

What can you tell  us about this play?

Haley: When Sheridan Whiteside, a celebrity and literary critic known for his cutting wit, injures himself on the ice outside the home of the Stanley family, he must spend the holidays recuperating in their home. Hijinks, hilarity and penguins ensue. Grinches, grouches and Christmas-lovers alike will all find something to enjoy in this staged reading with lots of fun live Foley sound, music and a whole cast of characters both naughty and nice.

"The Man Who Came to Dinner" is set at Christmastime -- is that important to the events that unfold?

Haley: Christmas in “The Man Who Came to Dinner” offers the characters the opportunity to discover what is most important to them (control vs. friendship, fame vs. meaningful relationships, and order vs. spontaneity). Christmas can also be a time of transformation, which gives the characters the chance to grow and change over the course of the show.

How have you adapted or changed the play?

Haley: We are using the 1950 Lux Radio Theatre adaptation of the original 1939 script by Moss and Kaufman. This is my first time being involved in a radio play, but I am really enjoying the fast pace of the language and the creativity involved in producing live sound.

What is your favorite scene?

?Haley: My favorite scene comes as Sheridan Whiteside starts his Christmas Eve radio broadcast … and tries to maintain his focus despite interruptions from staff, family members, medical professionals, and escaped animals. This scene really makes the most of our fantastic ensemble, sound operators and live music.

Is there an actor in this production who could steal the show?

Haley: Oh my word, I hate to brag, but every single actor in this show is fabulous. Having an ensemble of such seasoned actors really makes my job as a director pretty easy. The sound engineers, Ari Burns and Janna Jones, and musician Christine Gilmore, might be the surprise stars of the night though.

Haley: Seeing this show is a fun, affordable and memorable way for people in our community to spend time together this holiday season. We hope to see you there.

WHAT: Moscow Community Theatre’s production of  “The Man Who Came to Dinner.”

COST: $10. Tickets available in advance at Safari Pearl in Moscow and at the door 30 minutes before the show. Seating is limited.