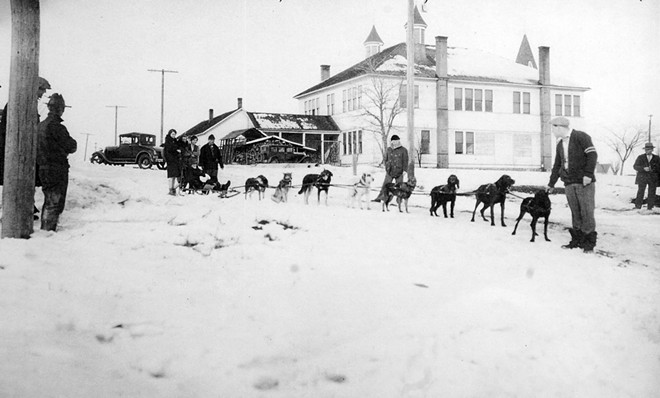 The dog sled team sent to rescue miner Rory Burke in 1930. Burke sits in the sled. From left behind the sled are Rory Burke's wife, unknown, Ida Weber and Sumner Stonebreaker.
click to enlarge

Tribune/Barry Kough
The Christmas Doctor
The country doctor is an iconic figure in the American West. J.P. Weber was one of the legends.

In the early 1900s Weber’s calling took him into some of the most primitive and remote places in Idaho. Getting to his patients often put his own life in danger. He performed operations on dining room and kitchen tables. When the work was done, many people didn’t have the money to pay him.

Weber cared for the people of Grangeville, Hells Canyon, Nezperce, Bovill and Elk River. His son, Tom, collected stories from his father’s life in his first book “The Christmas Doctor,” which now has a sequel, “The Christmas Doctor, Book Two: the True Story of Dr. J.P. Weber.” The book explores his father’s first 45 years, including a gripping tale that made national headlines in the New York Times and other papers in January 1930 when Weber and two other men embarked on a 70-mile trip by dog sled during an extreme winter to rescue a miner with blood poisoning.

Drawing from news accounts and interviews with his late father and with others involved in the rescue, Tom Weber retells the story in gripping detail, from the sounds of tree tops snapping in a blizzard to a meal of fried porcupine and broiled beaver tail at the Parr Hotel in Elk City. Photos of people who aided the men in their journey are included.

Many assumed the miner would be dead by the time the men arrived. He wasn’t, but like many he was unable to pay the doctor for his work. For Weber, that was to be expected. If a family was in poor financial straits he did not ask to be paid. Instead, people often gave him produce or invited him to their house for dinner, beginning lifelong friendships.

Tom Weber writes that on his deathbed his father told him, “a doctor is a servant to the sick and only that, not someone who is to be rich, who keeps himself away from contact with those who need him.”

Weber interviewed hundreds of people who knew his father to tell the incredible stories of his life. One woman told the author, “Your dad would go out and save a man’s life and it would not only save his life but change it. The guy would think, ‘If somebody was willing to go to all this trouble to help a miserable so-and-so like me, I’m going to do something worthwhile with my life.’ I saw it happen on several occasions.”

The sentiment is an echo from Weber’s first book that tells how his father rode the rails west as a young man in search of manual labor to earn money for medical school. At age 16, in Portland, he lost his life savings at Christmastime to a pickpocket. A religious nurse took him in changing his life. He went on to become a doctor and in 1923 moved to Elk River to work for the Weyerhaeuser Lumber Company hospital. He later practiced medicine in Grangeville for 18 years.

Author Tom Weber was born in Boise in 1946 and lives in Kearns, Utah. The book is available online at Amazon for $19.95.