There’s a passle of music around our region in the coming week. There’s some other stuff too.

Music is the only weapon at the inaugural Hog Haven Battle of the Bands from 5-8 p.m. Aug. 16 at Moscow’s Eastside Marketplace.

Bands from around the region will compete for a $500 grand prize. Admission to the family friendly event is free, though attendees may purchase tickets as a way to vote for their favorite. Tickets are 20 for $5, and proceeds will go to support Palouse Cares, a nonprofit organization benefiting children on the Palouse.

Participating bands include Bedspins, Tone Sober and Rubber Band. A beer garden will be open, and food will be available for purchase.

The final planetarium show of the summer season, “Binocular Stargazing,” will be at 7 p.m. Aug. 16 and 5 p.m. Aug. 18 at the Washington State University planetarium on the Pullman campus.

The show will guide viewers on the astronomical objects that can be seen among the familiar constellations using just binoculars, instead of a more powerful telescope.

The planetarium is in Room 231 of Sloan Hall.

Admission is $5 cash or check only. Children ages 6 and younger are admitted free.

This month’s community contra dancers will visit the Old Blaine Schoolhouse south of Moscow for the final dance of the summer from 8-10:30 p.m. Aug. 17.

A free family dance, with a jam band playing the tunes, begins at 5 p.m., followed by a covered-dish meal starting at 6:30, and free dance lessons beginning at 7:30. The evening also features a “pie extravaganza” for which attendees are urged to bring a pie to share.

The main dance will feature live music by Under the Wire, with Gary Miller of Yakima as caller. Members of Under the Wire are John McInturff on fiddle; Greg Hodapp on banjo and concertina; David Christian on rhythm; and Doug Park on bass guitar.
Contra dancing is a social folk dance that can be done without a partner. Dancers form two long lines with pairs of dancers then progressing up and down the lines.

The schoolhouse is at the corner of Eid and Blaine roads, and a map may be found online at www.palousefolk.org.

Cost is $8 regular price, $6 for Palouse Folklore Society members and $5 for first-time dancers. 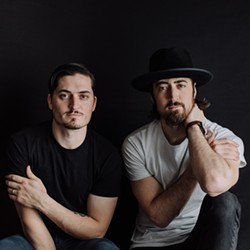 The Talbott Brothers will play Tuesday at John's Alley in Moscow.

The Talbott Brothers of Portland bring their brand of rock and blues to the stage Aug. 20 at John’s Alley in Moscow.
Music is set to begin at 9:30 p.m. at the venue, 114 E. Sixth St.

The group will meet in the second-floor conference room at the library, 417 Sycamore St.