Born in California, raised across the United States and a Moscow resident since 1984, the University of Idaho professor played music solo for 10 years before creating a band in 2012. 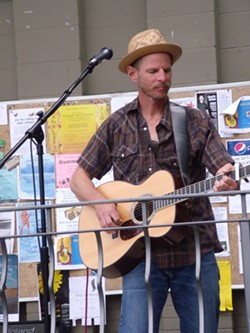 Bennett Barr, whom Drake calls a “hippie dude” in the center of the Moscow music community, helped put the Tom Drake Band together.

“The band is finally stabilized,” Drake said. “This is the supreme band.”

The band’s Americana and folk rock sound spins out of Drake’s love of music during the time when rock music made the crossover to country. Artists such as Bob Dylan are not only an inspiration, but a popular cover for the band.

Drake writes original songs and said the band plans on recording another disk this summer. For now, people can listen to past recordings at www.reverbnation.com/tdrake, where songs, such as “Smokin’” and “No Conditions, Live Abridged” are free for download.

The band practices once a week and has played at Moscow’s One World Cafe, John’s Alley, the Moscow Food Co-op and Green Frog Cafe in Palouse. Drake said he’d like to be able to perform for the public once a week, but for now, the band’s monthly — or bi-monthly — performances will suffice, due to the limited number of venues in the area.

On Wednesday, the band will perform as part of the UI Department of Student Involvement’s Daytime Distractions. Listeners can tie-dye shirts while tapping their toes to Drake’s beats.

"It’s going to be a lot better than people think it’s going to be," Drake laughed. As for why this English professor plays music for others?

->if you go: WHAT: Tom Drake Band performs as part of Daytime Distractions WHEN: 12 p.m. Wednesday WHERE: Idaho Commons Green, 875 Line St., University of Idaho COST: Free NOTE: The band will also play at Moscow’s Farmers Market on Aug. 17.

During the Tom Drake Band performance, listeners can dye T-shirts as part of Daytime Distractions.

Samantha Gunning, University of Idaho Student Involvement summer coordinator, said the staff will provide the dye, string for sectioning and a limited amount of T-shirts in adult sizes. Gunning recommended that people, especially with children, bring a clean white shirt or other item, such as white socks.

1. First, wrap your shirt up and tie off the pattern. Use spirals or other patterns for a cool look.

2. Next, choose one, two or three colors. When using more than one color, start with the lightest color.

3. When you begin, immerse one-third of your shirt in the lightest color dye bath for 4 to 7 minutes, stirring occasionally. Remove when the color is a little darker than desired. Rinse well and repeat with the next darkest color on another one-third section. Repeat until you have used all your colors.