Forget January; February is when music heats up - A look at what 2014 will bring

By DYLAN BROWN of Inland360.com 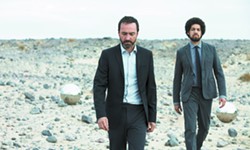 Broken Bells are indie rockers Brian Burton (better known as Danger Mouse) and James Mercer, the lead vocalist and guitarist for the Shins.

The music world is gradually rousing from its Christmas coma. Bad Religion’s surprisingly traditional holiday album has been returned to its shelf with the same sense of confusion it was taken down with. Aside from Beyonce making waves with her iTunes album drop to end 2013, this year is taking a bit to get rolling, but here are a few exciting albums due out in 2014.

The Shins frontman James Mercer and producer Danger Mouse reconvene for their second album and from the sounds of the single, “Holding On For Life,” an eerie apocalyptic resurrection of the Bee Gees, it will be one heck of a post-period piece.

If the performance of “Wave” done live with the Los Angeles Philharmonic is indicative of the hype surrounding the 12th record from the “Loser” alternative rock icon, it will be more like the well-orchestrated loneliness of “Sea Change” than the deranged garage rock of “Odelay.”

Southern but not aggrandizing Southern rock, country but not smarmy twangers, the Drive-By Truckers are like the perfectly flawed characters in their songs — the cheating pastor, the family in “Thanksgiving Filter.” They’re proud, vulnerable and ready for their 10th studio album.

Riding the ripple of “Latch,” a single from 2013 darling’s Disclosure’s No. 1 record, the Brit soul man ventures out on his own with singles like “Lay Me Down,” leading up to May’s debut.

With “Awake” already making the online rounds, expect to be swimming through more of the warm ambient tones that made producer Scott Hansen’s 2011 album “Dive” such a joy to fall into.