Gary Breedlove
Pullman high school student Hollis Higginson plays the part of Seymour in the play Little Shop of Horrors set to open Feb. 19 at the Regional Theatre of the Palouse in Pullman.

Hollis Higginson says the Regional Theatre of the Palouse’s take on the “Little Shop of Horrors” has something for everyone.

“It’s a really dynamic show,” said Higginson, who stars in the play as Seymour, a somewhat nerdy florist who, through a series of events, buys a man-eating plant that has plans to take over the world. “It’s hard to have so many elements, but this musical has it all. There’s romance, action and comedy.”

The play, which has been described as a “comic spoof of B-rated 1950s horror movies,” opens at 7:30 Thursday, Feb. 19 at the RTOP in Pullman and will run until Feb. 28, with an added matinee time March 1. 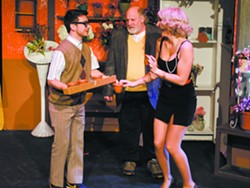 Calza, 24, said she wasn’t familiar with the play at first, but she fell in love with it after watching the movie, which starred Rick Moranis and was released in 1986.

“I’m really excited to see the audience’s reaction, to see their faces light up,” Calza said. “I became obsessed with this musical after realizing how amazing the movie was and I’m excited to share that with the audience.”

More information on Little Shop of Horrors and RTOP can be found on its website at www.rtoptheatre.org.