Sam Mendes’ “1917” is nothing short of astonishing. Designed as two extraordinarily long, unbroken shots, the film is a stunning feat of cinematography, production design and performance moving seamlessly as one piece. But the most incredible thing about “1917” is how often you forget about the trick of it all, absorbed in character and story rather than any “gimmick.” For Mendes, it’s a deeply personal story, dedicated to his grandfather, Alfred Mendes, “for the stories he told us,” which places this breathtaking World War I film into a stark and human reality. 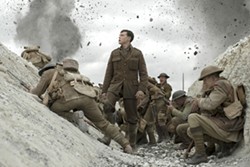 Although the cinematic undertaking is complex, the story, scripted by Mendes and Krysty Wilson-Cairns from a fragment of a war story told to him by his grandfather, is simple: A message must be delivered. Two young lance corporals, Blake (Dean Charles-Chapman) and Schofield (George MacKay), are summoned by General Erinmore (Colin Firth) and given the order to deliver a message by morning to a battalion of British soldiers who are walking into a trap if they attack the German line as planned. Blake’s brother is a lieutenant in the battalion, so whether or not he is “good with maps,” as the general mentions, he’s determined to fight his way through No Man’s Land and the occupied French village of Écoust to bring the message in time and save his brother from the massacre.

Blake and Schofield are constantly moving, as they wind their way up and down the trenches, and across the razor wire and mud caught with bloated and desiccated corpses both human and animal. The people they encounter along the way seem to wander into their path happenstance. Over the next eight hours, they’ll creep through deserted German trenches and war fields littered with ordinance; they’ll wander through abandoned farmhouses where buckets of milk are left standing. Through the hellish, ruined inferno that is Écoust lies a river and then a wood where their destination awaits. In the back of a rattling, rusted truck, a young English soldier will question why they’re fighting and dying over a few feet of the unremarkable farmland.

Legendary cinematographer Roger Deakins is the genius behind the camera that positions the audience as a witness to the harrowing journey. The camera is almost a spectral presence, circling around characters to reveal their spatial relationship to one another, winding its way through crowds of young soldiers sharing a moment of peace in the woods. At first the camera follows our pair, but in the last act, it tends to lead our young messenger on the journey’s final leg, as he pushes through soldiers lining a white-walled trench and bolts down a battlefield littered with bombs.

The function of the camera and its impossibly long shots (there are some concealed cuts in order to create the continuous effect) is to communicate the immediacy of the action and to place us within the horrors and harsh realities of this era. But we wouldn’t care to follow this journey if we didn’t care about our traveling companions. Chapman, as the charming, chatty sweet young Blake, is the heart, while McKay, as the reserved but soulful Schofield, is the body of this endeavor. Chapman, best known as Tommen on “Game of Thrones,” gives one of the most heartbreaking performances of the year, while McKay’s physicality, both explosive and intimate, is astounding. “1917” is staggering in its cinematic scope, but scaled to human size it embodies the truthful experience and enormous sacrifice of this war.