It’s been said that Matthew McConaughey is a character actor trapped in a leading man’s body.

After his rom-com hunk period in the 2000s, he had his “McConnaissance,” delving deeply into character work in “Bernie,” “Magic Mike” and “The Wolf of Wall Street,” on TV in “True Detective,” and in “Dallas Buyers Club,” for which he won an Oscar. His latest film, “Gold,” directed by Stephen Gaghan, is his most extreme character work yet, with him playing a balding, paunchy, cigarette chomping gold prospector in the 1980s, and yet McConaughey is so good he makes it work. 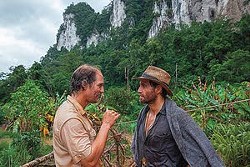 McConaughey tears into this role “inspired by true events,” playing Kenny Wells, a third-generation Reno mining prospector, carrying the Washoe Mining Company through the good times and the bad. By 1988, he and his employees are operating out of a local bar, trying to get investors on the hook to fund mineral mines around the world. Kenny’s at the end of his rope when he has a dream — a vision during a whiskey-soaked slumber — of a verdant tropical valley ripe with undiscovered gold.

This dream is significant, as it makes the notion of the American Dream — work hard and you’ll strike the mother lode — real and tangible. In “Gold,” it’s the dreamers who are the heroes, the guys who just are good despite their dubious actions and questionable character. They have faith — faith that they’ll strike it rich. “Just like my dream,” Kenny whispers as he gazes over an undeveloped Indonesian valley with his new partner, Mike Acosta (Edgar Ramirez).

The bankers are the bad guys. While their stamp of approval provides the validation Kenny seeks, their cynicism gets the better of them. Investment banker Brian (Corey Stoll) who discovered Kenny’s outfit, refers to him as a “drunk raccoon who got handed the Hope Diamond.”

It’s their lack of faith that positions them as the villains in the script by Patrick Masset and John Zinman. Disloyalty to the American Dream just isn’t tolerated in this fable of individual perseverance.

“Gold” isn’t quite as it was sold. The trailers, soundtracked to ’70s rock hits, promise a sort of rollicking “American Hustle” vibe, but “Gold” is tonally muted, despite McConaughey’s large performance. The soundtrack is more New Wave than classic rock, and Ramirez grounds what could be an overly wacky energy as Mike, the serious, educated half of the duo. It’s darker and more nuanced than broad.

At times, the story feels compressed, with some jarring transitions, as the narrative plays out. But you’re along for the ride with the fully committed McConaughey, who swings for the fences with his bold acting choices and studious lack of vanity, and he manages to create a seamless, inhabited performance. It’s the kind of performance that should have garnered awards attention, if only it had been released and marketed properly.

Late in the film, Kenny claims he’s never cared much for money, that he only ever cared about gold. For him, it’s the thrill of the chase. His faith in himself and his own luck makes up his morality and perfectly espouses the neo-liberal individualism that makes up most Hollywood hero tales. But this story shows that the American Dream is always a huge gamble built on little more than hopes and dreams.