‘Hidden Figures’ adds up to a wonderful film

It’s saying something about 2016 that many of the films that critics and audiences have latched onto are life-affirming celebrations of humanity and spirit — “La La Land,” “Moonlight,” “20th Century Women.” 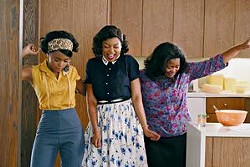 Well, add the inspiring and heartening “Hidden Figures” to that list. It’s a feel-good crowd-pleaser that celebrates the achievements and acknowledges the struggle of the real-life black women who worked at NASA in the 1960s, helping astronauts take flight.

Based on the book by Margot Lee Shetterly, “Hidden Figures” is directed by Theodore Melfi and adapted by Melfi and Allison Schroeder. It’s the story of Katherine Goble Johnson, Dorothy Vaughn and Mary Jackson, and their trials and triumphs at NASA during the space race.

Melfi’s direction is fast-paced and energetic, and lets the performances shine. This is a film powered by the stratospheric levels of charisma of its three lead actors. In any other film, Taraji P. Henson, Octavia Spencer and Janelle Monae would steal the whole show, and as a trio, their winning charm takes off like a rocket ship, inspiring multiple spontaneous applause breaks throughout.

Henson leads the pack as math genius Katherine, whose prodigious faculty with geometric calculations allows her to move up from the confines of the West Campus to the big leagues, where a host of white men, led by Al Harrison (Kevin Costner) are calculating how to send John Glenn into orbit.

The stakes are high because of the U.S. rivalry with Russia, but the most important battles are the ones fought on home turf. These women are striving to succeed, but the finish line keeps getting moved. Mary (Monae) takes her ambition to be an engineer all the way to court, where she petitions to take classes at a segregated school. Katherine has to contend with extra assignments, little credit and a half mile walk to use the segregated restroom at work.

“Hidden Figures” never shies away from the horrors of racism in Virginia at the time, which is why the personal victories of these enterprising women are that much sweeter. They follow the rules, but see clearly that they’re unfairly restricted because of their race and gender. They understand that unfair rules need to be broken or bent sometimes, whether that’s pilfering a book on computer language from the library or stepping out of the chain of command to urge a higher-up to grant access to critical information.

These small victories are the ones that make you stand up and cheer — not John Glenn orbiting the globe — because the film is focused so specifically on the experiences and subjectivities of these women. It’s refreshing to exalt not just the women or people of color, but the mathematicians, scientists and scores of people who showed up to work each day to achieve, as a team, this amazing goal of space flight. The dashing white male astronauts are relegated to side characters while the math nerds become the true heroes.

“Hidden Figures” is an unflinching and trenchant analysis of the social constructs of prejudice and racism, but combined with its lighthearted tone and uplifting message, it’s utterly intoxicating and as charming as could be. It’s an assertion of humanity and civil rights that is pure cinematic nourishment for soul.