By DYLAN BROWN of Inland 360 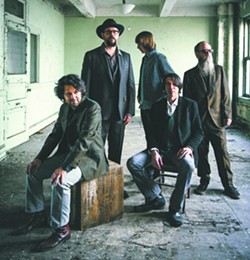 They’re a million things at once — ever changing and deeply rooted. But distilled down to the moonshine, the Drive-By Truckers are nothing short of real.

Despite the rest of the band changing almost wholesale since forming in Athens, Ga., in 1996, the Truckers’ core, Patterson Hood and Mike Cooley, is the same on their latest album “English Oceans” (released March 4) as it was almost two decades and nine records ago.

The northern Alabama boys are unflinchingly Southern rock in the Lynyrd Skynrd vein, and like Ronnie Van Zant and his crew, who they pay frequent homage to, they are at once proud of where they come from, genuine, hardworking blue color folks — and humble about its shortcomings and hypocrisies. They’re getting older, but alternating vocals throughout, both Hood, 49, and Cooley, 47, still rock hard and angry, while also telling the middle-aged tales of divorce and failed careers. Boiled down, these five songs from “English Oceans” are indicative of all that is Drive-By Truckers (listen to them here).

“Sh.. Shots Count” Growling out a first line, “put your cigarette out and put your hat back on — don’t mix up which is which,” Cooley showcases the band’s middle finger countrified rock ability that can still get a barroom moving.

“The Part of Him” The rough hewn political truth exemplified by the slimy glad-hander — “wingnut raised and corn-fed” — is signature Truckers — sick and tired of the good-old boys who “grease the wheels to get you in the door.” Needless to say, they’re not Francis Underwood (House of Cards) voters.

“When Walter Went Crazy” Many of the gritty, down-home characters of Truckers songs have reached wit’s end and “just snap.” Like the washed-up, trigger-happy cop on “Used To Be a Cop” and the pastor-turned-adulterer on the title track of 2011’s “Go-Go Boots,” old Walter torches his house in a murderous rage with “rattlesnakes in his eyes.”

“Grand Canyon” It hit home when friend and tour regular, Craig Lieske, died of a heart attack shortly after opening for the Truckers. “You always have those friends that you kind of deep down know you’re going to lose,” Hood told Daily Beast reporter Howard Wolfson. “He was not one of those guys. ... So it was just such a shock.” So Hood penned this heartfelt homage about a quiet moment shared by friends watching the shadows dance at sunset. “I’ll think about the Grand Canyon,” Hood sings. “And lift my glass and smile.”