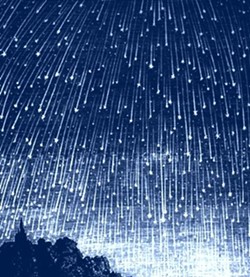 Picasa 3.0
An image of the Perseid Meteor Shower from Magdalena Ridge Observatory in New Mexico.

The annual Perseid meteor showers are Sunday, Aug. 11 and Monday, Aug. 12 and will be marked by a Star Party Sunday night at Nez Perce National Historical Park in Spalding.

The party starts at 8 p.m. at the visitor center. Lewis-Clark State College Professor Emeritus Victor Kriss will talk about the meteor shower and its origin. Ranger Kevin Peters  will speak about the influence of the stars in the Nez Perce culture. As the sky darkens people will be invited to go outside and view the "shooting stars." People are encouraged to bring lawn chairs and blankets for seating and warm clothing.In a press release Kriss said the actual peak of the meteor shower will be Monday morning, before the Sun rises, with the best viewing after midnight on the evening of the 11th/12th.  Late Sunday night an average of one meteor per minute should be visible. To view the meteors, Kriss said one should find a dark location away from streetlights and then watch anywhere in the sky.

According to NASA, the annual shower is caused by the yearly passage of the Earth through the orbiting debri left behind by the periodic comet Swift-Tuttle.