Camille Dungy challenges these common misperceptions in her work, her play and her words. The writer, editor and professor of English at Colorado State University in Fort Collins will speak Friday in Lewiston as part of the 35th annual Stegner Lecture.

Nature shows up in Dungy’s poetry and prose, and she spends time outdoors hiking and kayaking. But black people aren’t always seen in these spaces, she said. That’s changing. In 2009, she edited “Black Nature,” a collection of nature poetry by black poets -- the first anthology of its kind, despite the high number of existing poems. Coincidentally, right about that time, an online community called Outdoor Afro was started to connect black people with the outdoors.

In a phone interview, Dungy shared a bit more about her take on nature, poetry and the West:

On what draws her to the West: The landscape is better. I like the openness, I like the dryness -- other people don’t, but I do. People here in the West, we believe in the future, in possibility and in making the best of things.

On how nature came to influence her writing: I grew up in a planned community of tract homes right on the edge of Irving, Calif. We lived on the outer edge, on this border between this community and the wild. I had a lot more fun playing there in the wild space than the greenbelt that was crafted for the community. 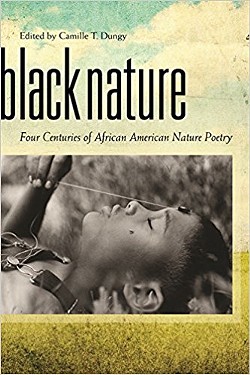 On why black poets who write about nature haven’t always always been seen: People think black people aren’t attached to the environment. Sometimes that’s because they write differently in their response to the natural world. They’ll speak to the threats and dangers as opposed to finding peace. The current movement in environmental writing makes a lot more space for that. Now there’s space for feeling sad, scared, confused.

Advice for people who don’t like poetry: Read my book of essays. (Laughs.) In my experience, even when someone says “I don’t get poetry,” if you put a poem in front of them they get it -- they understand. They just don’t trust themselves. Stop pleasing your seventh grade teacher -- there’s no quiz. We can just say, “Look, does it make you feel something?” You don’t have to name it, just feel it and move on.

On what draws her to poetry: It’s concise. And it’s pretty. (Laughs) And it’s a way of saying things more efficiently. I like essays too, but they’re longer to write. Which counterintuitively was useful when I had a young child. I could start writing, then walk away and come back.”

Language Silence is one part of speech, the war cry of wind down a mountain pass another. A stranger's voice echoing through lonely valleys, a lover's voice rising so close it's your own tongue: these are keys to cipher, the way the high hawk's key unlocks the throat of the sky and the coyote's yip knocks it shut, the way the aspens' bells conform to the breeze while the rapid's drum defines resistance. Sage speaks with one voice, pinyon with another. Rock, wind her hand, water her brush, spells and then scatters her demands. some notes tear and pebble our paths. Some notes gather: the bank we map our lives around. From “Black Nature: Four Centuries of African American Nature Poetry,” edited by Camille T. Dungy.

WHAT: Stegner Lecture: “The Native Home of Hope”