If you watched the 1920 version of “Dr. Jekyll and Mr. Hyde” in your home, you’d notice something was missing. There’d be no recorded dialogue, sound effects or music. 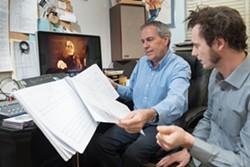 That won’t be the case if you watch it Thursday at the at the Kenworthy Performing Arts Centre. The silent film will be accompanied by a live eight-piece ensemble playing an original full-length score recently written by Dylan Champagne, a Moscow composer.

This isn’t the first time he’s taken on such a task.

In the fall of 2015, Champagne got the idea of creating an original score for a silent film. At the time, he was studying music composition at the University of Idaho. He selected “Phantom of the Opera” from 1925.

“Before I knew it, I was up to my neck in composition,” Champagne said.

The project took five months to complete and was performed live at the Kenworthy in April 2016. With some small tweaks and edits, it was performed a second time one year later at the Garland Theater in Spokane.

It may be hard to describe the experience in a sound bite, but Champagne says it's one that’s been well received by local audiences.

“It’s not that hard of a sell,” Champagne said. “It’s fun to see these classic silent films you don’t normally get to see in a theater. And there’s something about live musicians playing in real time.”

The showing in Moscow was so popular that Champagne was asked to do the same thing for another silent film -- this time as a fundraiser for the Kenworthy. The film was selected, and Champagne got back to composing.

“It’s so much work, but it’s fun,” Champagne said.

The deadline made for intense but exciting work that was primarily completed over the summer.

This time it went more smoothly.

“There was a huge learning process the first time around,” Champagne said.

One of the things he learned the first time was how to help musicians to find their place in the music. Though several instruments are involved in the performance, not all of them are playing all of the time. Because the rests could get confusing, Champagne added cues in the score so musicians could catch a glimpse of what others were playing.

The musicians aren’t watching the screen while they play. Facing the audience, their eyes are on the music and conductor, Al Gemberling. Gemberling is a music professor at the UI who worked with Champagne on his first silent movie score performance.

“It is probably the most challenging type of conducting I’ve ever done,” said Gemberling.

The performance demands 45 minutes of solid conducting before a brief intermission -- then heads right into another solid 45 minutes. To add to the challenge, the timing has to be perfect.

“The tempos have to be exact,” Gemberling said.

In a typical performance, musicians take their cues from a conductor; in this case, the conductor is taking cues from the film. Gemberling has to speed up or slow down based on what’s happening on a screen the musicians can’t see.

The end result is something special.

“It does a great job of doing what music should do, which is enhancing what is happening on the screen,” Gemberling said.

WHEN: 7 p.m. Thursday, Sept. 28; beer and wine raffle and social hour begins at 6 p.m. with appetizers from Thresh Catering, desserts from Treat Bakery and a no-host bar by Maialina.