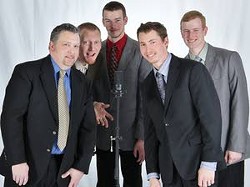 Kevin Pace and the Early Edition

It’s no surprise that you’ll find bluegrass musicians at bluegrass festivals. Just don’t forget that not all of them will appear on the stage.

Bluegrass festivals differ from many other music festivals, in that they are part concert and part jam session. This weekend’s Valley Bluegrass Festival at the Nez Perce County Fairgrounds — the second annual put on by the Lewis Clark Bluegrass Organization — is no exception.

Even with a solid lineup of performers, part of the festival experience is wandering through the grounds where small groups gather to make and share music. Even the festival’s headliner, Kevin Pace, of Kevin Pace and the Early Edition, agrees.

“Some of the best pickers there’s ever been, you’ll never hear them because they won’t get on a stage,” Pace said.

Based in Spokane, Pace enjoys walking around when his performance schedule allows. Sometimes he participates, sometimes not, but he agrees that this relational music environment is central to the experience — even when he’s the festival’s main act.

Performing both traditional bluegrass and gospel music, Pace said the primary difference between the two categories is content: gospel music is religious and bluegrass is secular. Gospel, he said, has always been an important ingredient in bluegrass.

“Here in the Northwest, the thing that’s different about our group, is that we focus more on gospel,” Pace said. “Not as many out here do that as down South.”

The group entertains audiences with their music, but also provides an opportunity to spread the “good news,” or the gospel. Allowing the music to speak for itself through gospel and positive, upbeat bluegrass has been well received by fans in the Northwest, including those in the valley, where Pace has previously performed.

When Pace moved to the Northwest from the South a few years ago, he found that bluegrass was bigger than he expected. Still, he believes bluegrass is among the smallest — if not the smallest — of the music genres.

“In a way that’s a good thing,” Pace said. “You want to introduce more people to it and get more fans, but I think because it’s small, it’s kept the music humble.”

Only a handful of bluegrass musicians — Ricky Skaggs and Alison Krauss for example — have become household names.

“If you’re wanting to get rich, you don’t want to get into bluegrass,” Pace said with a laugh. Growing up in Georgia, bluegrass is the only style of music Pace said he’s ever listened to or cared to play. He and his band have performed at local festivals and are working on their third album. And coming upon other skilled musicians is part of the fun for Pace in performing at festivals, like the one this weekend.

“We also get to be a fan when our job is over, just sit out there and listen to others,” Pace said.