Their biz is your buzz: Troy's Landgrove Coffee follows the bean's latest wave 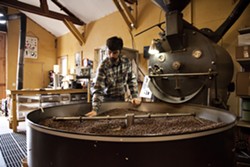 Jon Binninger roasts coffee beans from around the globe at his roastery outside Troy, Idaho.

Our love for coffee is glaringly evident. Drive-throughs abound, even in little towns, and in many home kitchens professional-grade steam machines have replaced old drip pots.

“Once people have experienced quality they don’t go back,” says professional coffee roaster Jon Binninger of Landgrove Coffee in Troy.

On average, Jon, 42, and his wife, Hannah, 41, roast 2,500 pounds of coffee weekly in drum roasters at their family roastery in the woods outside Troy, making them one of the region’s largest wholesalers. They focus on sourcing fine beans that arrive green in burlap sacks from around the world and leave roasted and vacuum sealed for coffee shops and businesses locally (at the Moscow Food Co-op and One World Cafe in Moscow) and nationally.

After the rise of Starbucks, which established its first store in Seattle in 1971, espresso drive-throughs spread across the Northwest in the late 1980s. As the general population developed a taste for specialty coffee, its popularity quickly gained momentum.

“All people thought they needed back then was an espresso machine and they could write their own retirement. Quality suffered,” says Binninger, who started roasting beans in 1998. Before that he owned a coffee shop in Boise where he met Hannah, an early morning drive-through customer.

Coffee aficionados divide coffee history into three waves. The first wave was coffee’s spread around the planet, ending in its freeze-dried (but low-quality) post-World War II pinnacle. The second wave features Starbucks and the rise of higher-quality coffees and specialty beverages.

We are now in the third wave where coffee, like wine terroir, is being delineated to its origins to pinpoint the specific characteristics created by the landscape. Time and level of roasting are highlighted, along with specific grinding and brewing methods.

“The more traceable the better, down to one harvest,” he says. “It’s not something that was available a few years ago.”

Another change in recent years is a movement toward very light roasts, says Hannah Binninger. “It has a different taste.”

This emphasis on quality can translate to a $5 cup of drip coffee in cities like San Francisco, she says.