Work on what will be the region's largest outdoor mural resumes 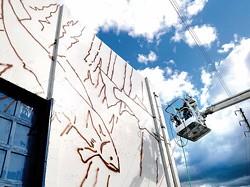 Kyle Mills, Lewiston Tribune
Artist Rolf Goetzinger washes off the winter dust and grime Monday on the west side of the Sonoco building as he prepares to finish his mural that will serve as the backdrop to the Canoe Wave sculpture near the Interstate Bridge in Lewiston.

With the arrival of spring, artist Rolf Goetzinger of Sandpoint is back in Lewiston to finish his river painting that will serve as a backdrop for the Canoe Wave sculpture off the Interstate Bridge on the Lewiston Levee.

The first task will be to pressure wash the wall of the Sonoco building. After that, Goetzinger will begin to apply the cool colors of a whirlpool and water scene. The final step will be painting multi-colored fish swimming across the 27-foot-tall, 225-foot-long concrete canvas. The fish include salmon and a sturgeon.

"It's like you're looking through sparkling water, so you see the sunlight on the fish," Goetzinger said Monday after arriving at the site, which has been stenciled with an outline of the mural's elements since last fall.

Goetzinger said he brought 30 gallons of acrylic paint for the job. He will mix many of the colors himself and apply them to the wall with a 61/2-inch roller. Anything bigger than that gets too heavy to hold over time, said the artist, who has painted water towers and outdoor walls around the country.

One of his jobs this summer will be painting a giant cigar label on a water tank in Tampa, Fla.

Goetzinger is the brother of Peter Goetzinger, who painted the mural of historic downtown Lewiston at the corner of Fifth and Main streets. The brothers grew up in Lewiston.

"It's nice to be able to put something back in the town where you're from," he said.

Goetzinger used a projector last fall to make the outlines for the mural. But temperatures soon dropped, and he had to put off finishing the project until this spring.

Final work on the mural is expected to take about 14 days, but progress will depend on the weather. Goetzinger has until May 10 to complete the project, said Lewiston Parks and Recreation Director Tim Barker.

Native plants and a pedestrian path will be added to the site this summer, Barker said. Landscape architect Brian McCormack is designing the area, which will include artwork by Lapwai children etched on rock.

The west Lewiston enhancement was an Idaho Transportation Department project paid for with $500,000 in transportation department funds matched by $138,000 in Lewis-Clark Bicentennial appropriations, $55,000 in city cash and in-kind contributions from Avista Utilities and city staff.