Zach Wilkinson/Inland 360
The University of Idaho’s official Vandal tartan is seen on coasters at the VandalStore in Moscow. Scarves and other knit goods are set to be available later this year.

The Palouse hills might start looking more like the Scottish Highlands now that the University of Idaho has an official tartan.

The Vandal tartan features the university’s colors, with gold, black, gray and white in a bright plaid. Merchandise featuring the tartan will be available in the fall, with a sneak peek at the VandalStore now in the form of beverage coasters. The Border Highlanders, a bagpipe band, will don Vandal tartan kilts, hopefully by homecoming, which is where the idea started.


Ben Hunter, dean of libraries at UI, also is the pipe major for the Border Highlanders. Hunter was performing with the pipe band at homecoming this past fall when someone asked UI President Scott Green if the university had an official tartan. Green said he wasn’t aware of one but pointed to Hunter as the person to ask.

“We don’t, but that would be pretty cool if we did,” Hunter said he told the questioner. “It wouldn’t be that hard.”


Green later asked him for a proposal, Hunter said.


Eventually, Lochcarron, a mill in Scotland, was contacted for the design and worked with the university on the pattern and colors. The options were narrowed to three, leading to a vote for the final design. There were more than 4,000 votes from the community, with the winner announced earlier this month.


“People have been asking about it ever since,” Hunter said about the hype created by the tartan vote. “Not just people on campus, but people in the community and alums from around the region have been excited to find out what it is.”


Hunter said he had hoped the Border Highlanders would be outfitted in the official tartan for spring commencement but wasn’t surprised to learn “it takes a while to mill a dozen kilts out of Scottish wool.”


Not only will the tartan give students, faculty and alumni another piece of Vandal swag, but it also connects the Border Highlanders to the university. 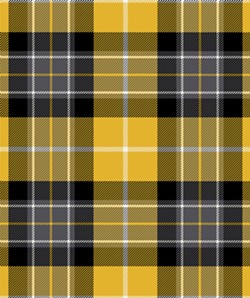 “This is a way to really get the band involved in the University of Idaho in a more meaningful way,” Hunter said.


The Border Highlanders band was founded in 1974 by a group of UI faculty members who met at what is now the Pitman Center. Eventually, the group changed from the Palouse Pipers to the Border Highlanders to represent people in the group from UI in Moscow and Washington State University in Pullman. Some from Lewis-Clark State College in Lewiston also have been involved over the years.


Hunter himself has been piping for almost 30 years. He saw bagpipes on a trip to Scotland when he was 15 and thought it would be fun to learn.


He will be sharing his expertise in an introduction to Highland bagpiping this fall, another way to connect the band and university. The class is open to students, staff and community members who are curious about the instrument and want to learn some basic tunes. He said he’s hoping it also will help grow the numbers of the Border Highlanders.


“We really are looking for band recruiting not just at UI, but all over the community,” he said. “You don’t have to prove Scottish heritage — all ages, all sorts of people can join. It’s a welcoming group. It’s a really fun community and a really fun thing to be a part of, especially these days, to build connections with people and build community — it’s all the more important to do this kind of thing.”


Hunter wants to end stereotypes that bagpipes are hard to play or that only certain people — those who are in peak physical shape, young or have exceptional lung capacity — can play. He has seen 10-year-old pipers and pipers who are 90. He’s seen them of all shapes and sizes. Ultimately, bagpipes are no more difficult than any other instrument, he said.


It does, however, take practice.


Although there are physical aspects to the instrument “it’s like riding a bicycle; you learn the rhythm of it to get the feel for it.”


Some of that work is done on a practice chanter, a smaller instrument that doesn’t include the full bagpipe, so it’s not as loud.


That’s the one stereotype about the bagpipe Hunter can’t argue against: The instruments are loud because they were designed to be played outdoors.


That can make it difficult to find a place to rehearse. Over the years, Hunter said he’s practiced in college dorm rooms, apartments and churches. Now he practices in a shop at his house to “spare his family.”


“In the summer, it’s great to go outside and play,” he said. “Depending on where your neighbors’ musical tastes may lie.”


After summer practice, Hunter and the dozen or so other Border Highlanders will dress up in their black and gold kilts for UI homecoming, playing the pipes across the Palouse.

Most countries call the pattern of interlocking stripes and squares a plaid, from the Gaelic word for blanket.

Tartan also refers to the pattern of interlocking stripes, but is more associated with a woven design used to make kilts or other Highland wear.

In the U.K., plaid refers to the long tartan piece worn over the shoulder of a kilt. In the U.S., plaid is used to describe the pattern, and the term tartan refers to a plaid associated with a clan or organization.

The original kilt was known as the “belted plaid” and was basically a large blanket that was gathered and belted at the waist. It was traditional for men in the Scottish Highlands during the 16th century as a skirt-type garment with pleats in the rear and the upper half worn as a cloak draped over the shoulder or covering the head. The knee-length kilt didn’t develop until the 17th or 18th century. In 1746, the Dess Act outlawed the wearing of the kilt, to suppress Highland culture, until it was repealed in 1782. In the 19th century it became associated with Scottish and Gaelic cultures. Kilts are often made of wool in a tartan pattern.


Origin of the tartan

The earliest known tartan in Scotland was in the third or fourth century. In the 17th and 18th centuries, the tartan became associated with Highland dress. Because of that connection with the Highland Scots, the British government established the Act of Proscription after the Battle of Culloden in 1746, forbidding the wearing of the tartan in the Highlands in an attempt to suppress Scottish culture. The act was repealed in 1785, but by then many Highlanders had lost the knowledge of old tartan patterns. Scots who grew up outside the Highlands developed an interest in preserving Highland culture and in the early 1800s began asking clan chiefs to submit samples of their tartans. In the 19th century, tartans became representations of different families, towns, districts, corporations, individuals or events. An official tartan has the approval of the governing body of whatever the tartan represents.

Clan tartans — for general use by a clan’s people.

Hunting tartan — dark in color and worn for sport.

Chiefs’ tartan — for personal use of the chief and his immediate family.

Royal tartan — for exclusive use by the royal family.