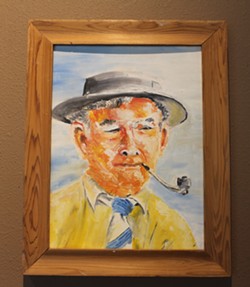 Exhibits by Colfax photographer Naomi Taylor and former resident Jerry Jones are on display at the Libey Gallery in Colfax through the end of the month.

Taylor, of “Gypsy Heart Photography,” grew up traveling the Pacific Northwest with her mom, showing dogs, according to a gallery news release. Her mother loved photography, and Taylor was inspired to keep her memory alive through photography after her sudden death.


A longtime former Colfax resident and 55-year staff member of the Whitman County Gazette, Jones chose paintings for the exhibit inspired by his travel to Australia. He participated in a Rotary exchange to Queensland and New South Wales in 1975, and photos taken there were published by the Gazette in a booklet titled “Friends Down Under.” He continued adding paintings of the people in the photos to his collection for the next 47 years.