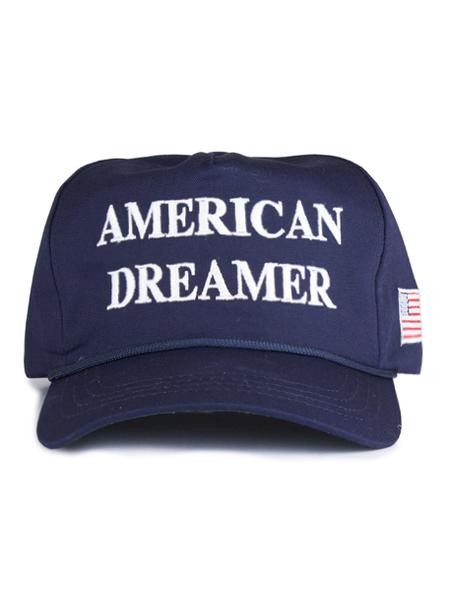 An American Dreamers hat now being sold on President Donald Trump’s official website is being called a dog whistle to racists.

In 1876, Sir Frances Galton invented one of the first devices to measure hearing.

Galton could determine different frequencies by forcing air through a small brass tube fitted with some modifications. After measuring the range of human hearing, he took his whistle to the zoo to test it on different animals. He was also fond of walking down the street and seeing the reaction he got from different dogs.

Today, we call the Galton Whistle a dog whistle, but there’s another definition for dog whistle cutting the airwaves these days. Dog whistle is now a term for “a coded message communicated through words or phrases that is understood by a particular group of people, but not by others.” Merriam-Webster added this definition to its dictionary last April.

This kind of dog whistle hit the news most recently last week when President Donald Trump began hawking a new $50 hat on his official website. The hat’s slogan, “American Dreamer,” references a controversial line from his State of the Union speech where he called on Congress to work on immigration reform to “defend Americans — to protect their safety, their families, their communities, and their right to the American Dream. Because Americans are dreamers, too.”

The other dreamers critics claim he referred to and left out of this statement are the Dreamers, the name for those who immigrated to the U.S. as children, were raised here, and now face the threat of deportation under his administration.

Reaction to the speech on social media was swift, with critics suggesting it was a racist dog whistle against immigrants. Racists gave the thumbs up with former Ku Klux Klan Grand Wizard David Duke tweeting, “Thank you President Trump. Americans are ‘Dreamers’ too.”

Now if you encounter an American Dreamers hat, you’ll have a keener sense of hearing.

Focusing on human rights: 2021 MLK observances look at the work yet to be done

Commentary: Facing our fear and anger