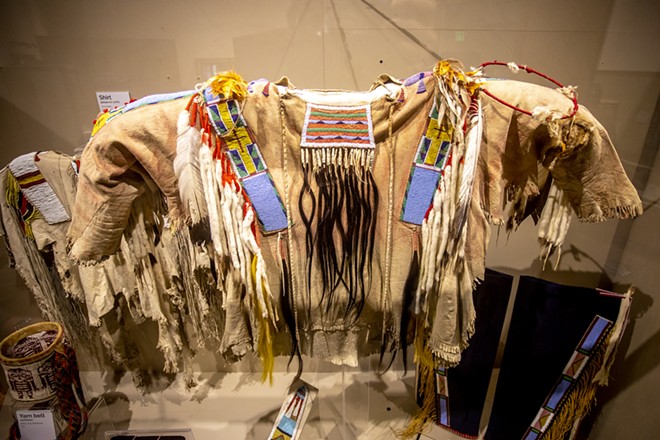 August Frank
A shirt from around 1880-1885 made of buckskin, hair, glass beads, ermines, feathers, wool and silk is on display along with items from the Spalding-Allen Collection at the Nez Perce National Historical Park in Spalding. It's part of a new exhibit created for the upcoming Renaming Ceremony when the collection will be formally welcomed back by the tribe.

In the mid-1800s, missionary Henry Spalding shipped an array of Nez Perce clothing and materials thousands of miles away from the people’s homeland with no thought that they would ever return.

On June 26, 175 years later, the Nez Perce Tribe plans to rename the valuable collection at the same site where Spalding acquired it. The celebration is being viewed as a significant turning point in history for the Nimiipuu.

The group of artifacts, presently known as the Spalding-Allen Collection, is on display at the Nez Perce National Historical Park Visitor Center at Spalding in a new exhibit specially curated for the renaming ceremony, when the new name will be announced.

“Everything in the collection is land-based, from the mountains, the tributaries, all these things allow us to exist. To me, they are sacred,” said Lynne Pinkham, a Nez Perce tribal member and museum technician who helped create the exhibit in a partnership between the tribe, the park service and private individuals. 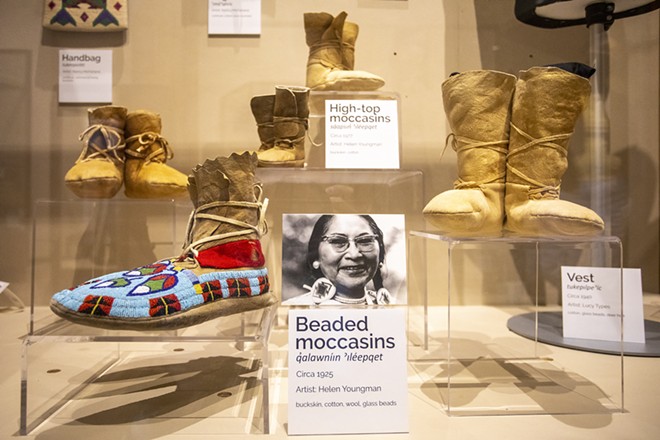 Colorful works by modern Nez Perce artisans surround the 21 items of the collection, which the tribe, working against the odds, bought back in 1996. 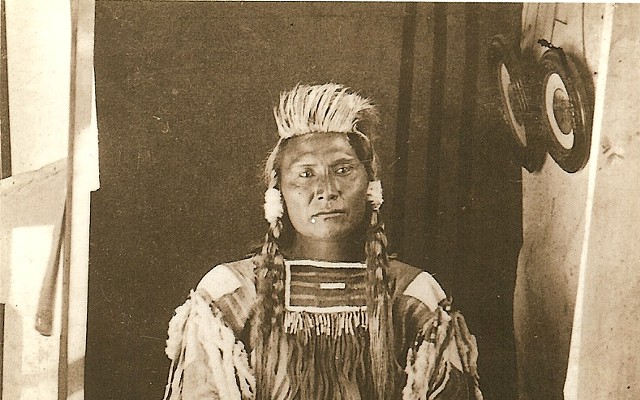 The display includes photos of contemporary creators and names for items in the Nez Perce language. Whereas past interpretations of the collection focused on dates and English descriptions of what items were, this interpretation demonstrates the continuity of Nez Perce culture, said Beth Erdey, archivist and cultural resources program manager at the park. Newer works show how the Nez Perce have adapted, using present-day materials while maintaining traditional methods. 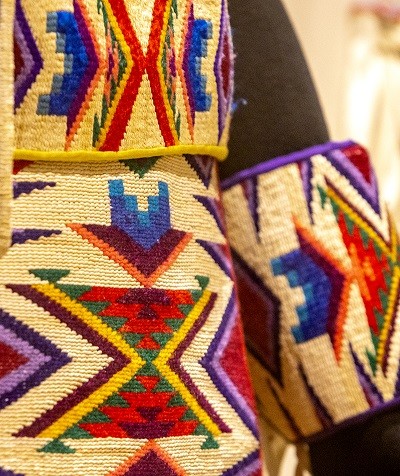 August Frank
A colorful belt, arm bands and belt pouch are works by contemporary Nez Perce artisans on display at the Nez Perce National Historical Park in Spalding.
Only a handful of people are left who know how to make many of the items in the exhibit, Pinkham said during a tour earlier this month. Their names and photos are to help build a bond with younger generations.

“We need to have them come out and teach the youth so our culture continues. We have artists; these are their faces. Go seek them out, learn from them. That’s what we’re trying to instill in our children with this exhibit, to light that spark within. In our beliefs, we all carry this light. They’ll want that knowledge,” Pinkham said.

In 1995, Pinkham and her 3 1/2-year-old daughter, Temi Cree Meninick, posed for a photo that was used as part of the national campaign to raise $608,100 to buy back the collection. In the picture, the Nez Perce mother and daughter are looking at an item in the collection but the little girl sees something the mother does not — an old man dressed in traditional clothing smiling at her. The old man was the tribal elder Horace Axtell, who represented the spirit of the collection, Pinkham said.“Each item has a spirit that will protect you. In our beliefs, we’re all born with that ability to see the spirit. You lose it when you are 5 years old.” 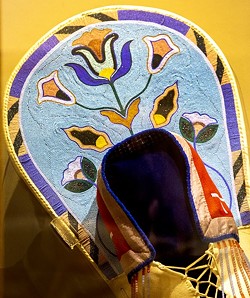 Both Axtell and Pinkham's daughter have since passed on. The poster illustrated the collection’s power to bridge past and present.

The Spalding-Allen Collection is recognized as one of the oldest assortments of Plateau culture known to exist. It is assumed to date back to the time of Lewis and Clark or earlier because belongings are passed down in Nez Perce culture.

“In other tribes, they might bury or burn their objects, but for us there’s a deep teaching of why they’re passed down and not put in with our ancestors; they’re supposed to have new buckskin when they cross to the other side,” Nakia Williamson-Cloud, director of the Nez Perce Tribe’s cultural resources program, explained earlier this month at a park presentation. “The old buckskin, the things that were left with the people to memorialize their ancestors … they have the very sweat of our ancestors and the stories that those things have passed on.”

Ceremonies honoring a person’s passing include the custom of “showing the clothes,” he said. Items are displayed for viewing, then buried in the ground for a year. Sometimes they are later worn by descendants. 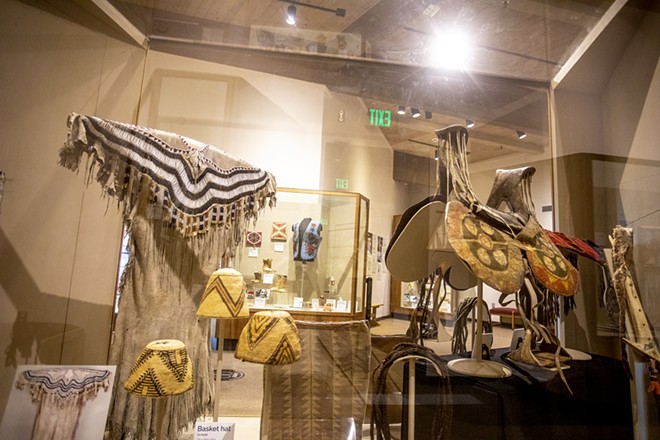 August Frank
Items from the Spalding-Allen Collection are on full display at the Nez Perce National Historical Park in Spalding as part of a new exhibit leading up to a Nez Perce renaming celebration marking the 25th anniversary of their return.

The clothing was constructed and processed to reflect the Nez Perces’ integral relationship with nature, he said. In older clothes, minimal alterations were made to animal hides. The animal’s natural shape was preserved to include tails, ear holes and glands. Women wore clothing made from animals of the female species, while men wore hides of the male species.

“Normally hide workers now will cut the legs off, cut the head off, because it just takes so much effort to try to tan those portions of the hide,” he said. “The time it takes to tan those extremities was a very concerted effort our old people did for a very specific reason: to honor that life that was given.”

There is no word for art in the Nez Perce language, Pinkham said. Each item has a purpose in the family unit. Stories and lessons are recorded in designs, colors and materials.

Hats are traditionally worn by women in Nez Perce culture, she said. While they are handed down, the right to wear one must be earned.

“In my family, you better know how to weave, ride a horse and take care of all the things that go into a longhouse before you ever wear the hat in public,” she said. A hat is a sign, “that the lady knows her stuff. You can go to that woman and they’ll teach you.” 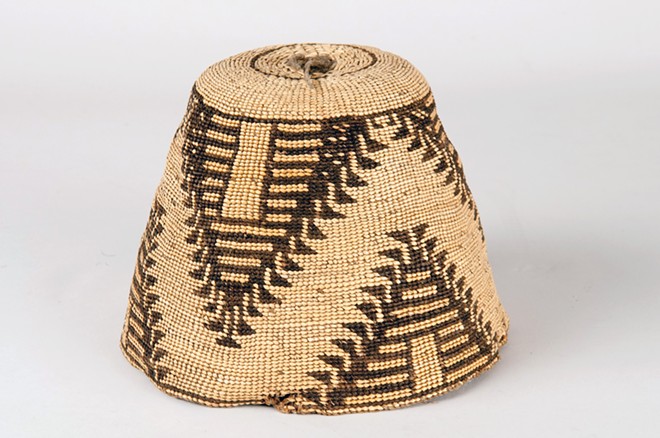 Nez Perce National Historical Park, Spalding
Hats are worn predominantly by women in Nez Perce culture for special occasions. This basket hat from the Spalding-Allen Collection dates to around 1820.

Weavers used a variety of plants and grasses. The choice depended on the object’s purpose, Pinkham said.

After the collection returned in 1996, a large woven bag separated from the rest of the items was discovered in Ohio. The tribe asked for a woman weaver to go and retrieve it and Pinkham volunteered.

“Technically, in our earlier teachings, women handled women’s items and men handled men’s items, unless they had permission,” she said, explaining why a woman was requested.

Today, that custom is not as strictly followed because there are fewer people available, she added.

Woven bags were used to store food, and when Pinkham got to Ohio and looked inside the bag, she saw it still contained a food source collected more than a century ago. The bag was made from plants with qualities that repel insects, she said. This is one reason the food remained preserved.

Today, the traditional plants used by Nez Perce for weaving are not as plentiful because of land access issues and insecticide use. Some native plants, like dogbane, have been listed as toxic weeds because they are poisonous to livestock. Over the years, the tribe has worked to educate the public in an effort to protect these sources for future generations, she said. 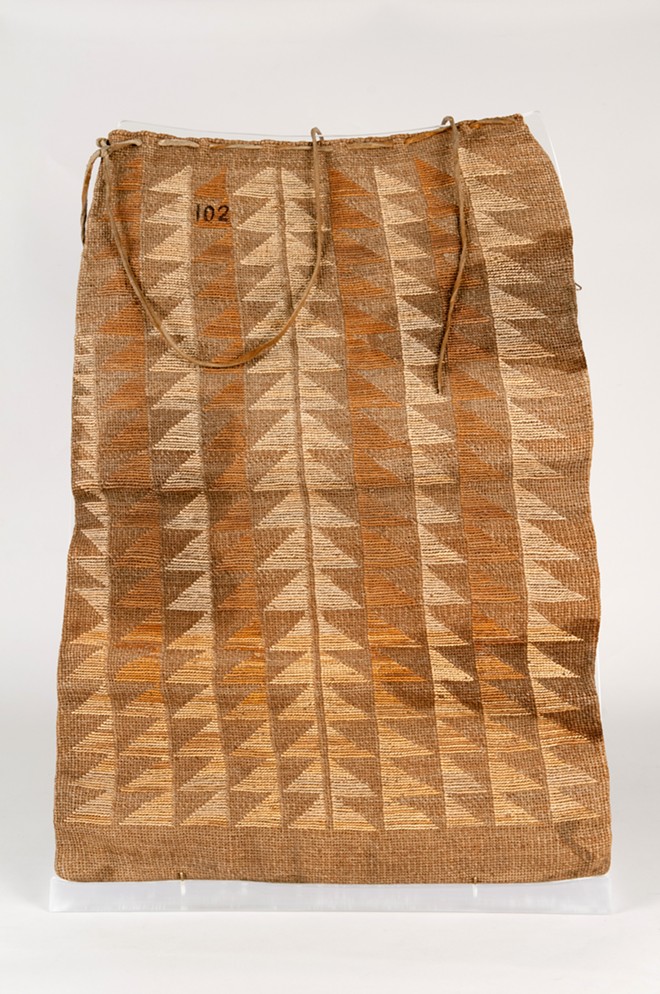 Nez Perce National Historical Park, Spalding
Large bag made from hemp and bear grass dyed with Oregon grape by a female member of the Nez Perce Tribe circa 1835. Lynne Pinham retrieved the bag from Ohio after the bulk of the collection had been returned.

The collection’s return and its renaming is a time of celebration that’s been a long time coming, Williamson-Cloud told the crowd at one of the talks leading up to the renaming ceremony. 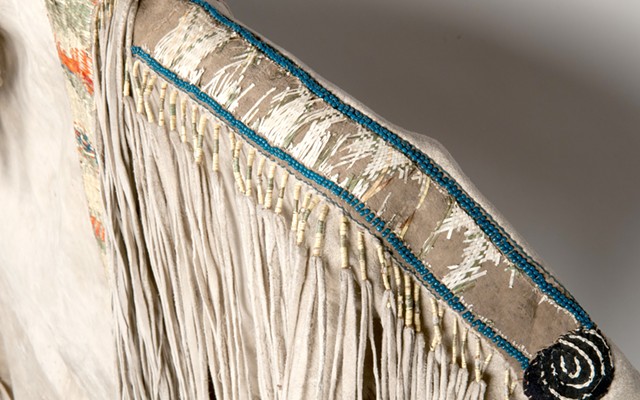 “I think, in a very ironic way, when you think of the circumstances under which these items were taken, they were taken with no intention of ever coming back here. They were taken as a form of plunder against our people, that they were never, ever going to come back here; but we kind of showed them that, inadvertently, this hostile act that occurred with the taking of these materials … ends up being the thing that ends up coming back to us and helps us move forward and preserves — in fact preserves — the oldest collection of Plateau material.” 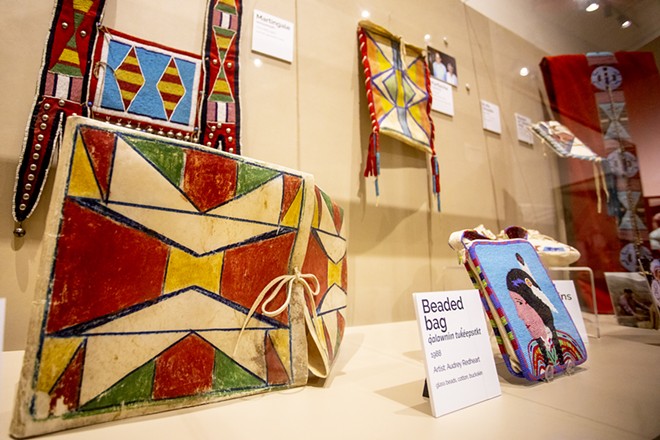 August Frank
A parfleche rawhide storage container (left) sits on display at the Nez Perce National Historical Park in Spalding last week. The containers were used like today's plastic totes or suitcases, said Lynne Pinkham, a Nez Perce Tribal member and museum technician. They were always made in pairs. Hides used to make them were not tanned so they had a tough exterior. The pigment used to dye them did not easily scratch off. The acrylic paints often used today do not compare in durability to the natural pigments, she said.

For the tribe, the renaming symbolizes how significant the items are.

A statement about the renaming issued by the Nez Perce Tribal Executive Committee compared the travails of the items’ journey to that of the trials of the Nez Perce.

“Trauma has been intertwined in the history of the Nez Perce people since the coming of the change. The symbolism of the renaming can be used to counter, fend off and help to dispel the trauma. The Nez Perce people are resilient and will grow stronger as the tamáalwit, nature’s world order, comes in balance again.”

Upcoming events marking the renaming of the exhibit