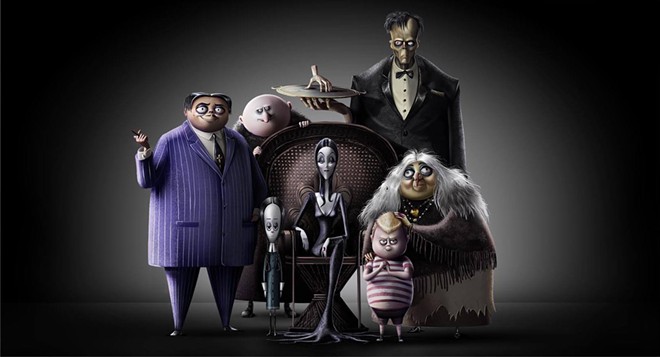 Two-and-a-half stars  out of four

They’re creepy and they’re kooky, mysterious and spooky, they’re all together… meh -- at least in the newest “Addams Family.”

The beloved goth family’s return in animated form is not good enough to warrant applause or bad enough to inspire moviegoers to grab their pitchforks.

It has moments of endearment, but not a strong emotional tug. It has sprinkles of humor, but no laugh-out-loud outbursts (and most of the humor is on the macabre side, going over the heads of younger audience members to whom the film is partially geared).

The Addams family includes Gomez (voiced by Oscar Isaac), Morticia (Charlize Theron), Wednesday (Chloe Grace Moretz) and Pugsley (Finn Wolfhard) for whom a “normal” day includes blowing things up, archery practice and making sure the house spirit gets its coffee.

While most in the audience may be familiar with the peculiarities of the Addams family, their newest neighbors are not. A housing developer, Margaux Needler, wants the Addamses out and their house redone so she can sell homes in her nearby complex. What she doesn’t know is the extended Addams clan is due to arrive any day, adding even more weird to her otherwise perfect neighborhood.

The film works best when it focuses on the family. The animation brings the classic characters to life in a new way, while still holding true to the original (yes, the finger snapping theme song makes more than one appearance in the score). The family is well cast, bringing the right amount of dread and despair to their voices. The visuals are fun to watch: Gomez dodges bombs made by Pugsley; Wednesday throws axes with extraordinary accuracy; Pugsley enters the mouth of a lion to retrieve his dinner; and Morticia looks even more gaunt and ghoulish than her real-life counterparts.

The film starts to lose itself -- and the audience -- with the introduction of the “normal” folk. Contrasting with the stark black-and-white of the Addams household, the rest of the neighborhood is colorful, with blues, pinks and greens and an emphasis on sameness that carries over into the character’s appearance. Maybe it was meant to comment on the neighborhood’s assimilation, but it looks like the animators used all their creative energy on the Addams family.

“The Addams Family” carries a message of acceptance and “being your true self” that works OK, even if it’s a Hollywood message seen many times before. The main emphasis is on the importance of family, regardless of oddities.

The mostly straightforward storyline is convoluted late in the game by senseless plotlines that come out of left field and add nothing to the story. If the film focused more on the Addams family without getting distracted it would have a stronger finish. As it stands, it’s a decent homage to the famous family and is more or less enjoyable -- much like any family reunion.