All around the town: Finding adventure on a local bus 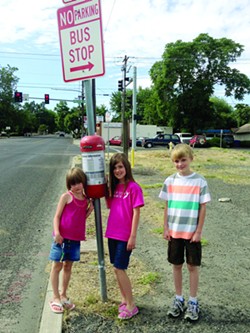 Exploring via public transit is a fun way to see your community in a new light.

The morning was cool when we headed out, though the air promised warmer temperatures. Carrying only the essentials and an expectation of adventure, we headed up the hill to the unknown awaiting us…at the bus stop.

Riding the bus is a utilitarian activity. Unless you’ve never done it and don’t have to: at that point it becomes a novelty, a vehicle for adventure and exploration. Add the fact that it’s free for kids in the LC valley this summer and that’s how my three kids and I, along with my sister, were seated in the blue seats of the bus one recent morning. We offer these tips for fellow travelers:

We’ve taken up wandering as a summer pastime, for which the bus is well suited. With the faintest of plans, we traveled from home to downtown Lewiston, walked over the bridge to Clarkston and headed back to Lewiston to catch the bus home, stopping along the way as our inclinations dictated. We took six and a half hours to do what could easily be done in three. But then, we weren’t riding the bus for speed, we were riding for the stories.

2. Get to the bus stop on time

The bus isn’t quick, but it won’t wait for you either. We were obvious newbies, holding up various schedules and maps, like lost tourists. But missing the bus isn’t entirely a bad thing. Tragedies of this sort have great story potential, which we inadvertently took advantage of. Given the option of waiting for an hour or hurrying to another stop, we opted to keep moving: which is how two adults and three school-age children were seen half walking, half running more than a mile through downtown Lewiston last week. I can’t say we had fun doing it, but we’ve had fun laughing about it since.

The unknown is the essence of adventure. By riding and walking through areas that we normally speed through on our way from here to there, we got to see and try new things.

The LCSC Center for Arts and History was on the way from the library to lunch, and simply because we walked by, we stopped in for a quick peek. Once we got inside, I realized we had never been to an art gallery before what with the kids running from piece to piece, shouting and touching everything. After a quick lesson in gallery etiquette, my kids finished up their first – and very quick – gallery visit.

We went straight from the art gallery to Effie Burgers, a new experience on a different end of the spectrum. We walked into the small, wood-paneled restaurant adorned with local sports schedules, hungry from wandering. When that one-pound hamburger appeared on our table, there was a collective gasp of wonder followed by five minutes of silence as the five of us devoured the hamburger and curly fries.

There are ordinary things to discover, too. Like squirrel tails on the side of the road, how to use a crosswalk, the rumble a bridge makes when big trucks cross it and watching someone carry a newly purchased rifle to his truck.

Wandering essentials are water, a cell phone and cash. Having a bus route and schedule saves on waiting and guesswork. If you’re not a kid, bring bus fare. Each time you board the bus, you’ll need to pay the fare in exact change. For adults, riding in Lewiston will cost you $1, riding in Clarkston is 75 cents, Pullman is 50 cents and Moscow is free. Monthly passes and other discounts are available for all of the transit systems.

Also essential? Stamina and decent footwear. My youngest prefers fashion over function when it comes to what she wears on her feet. Which is how ill-fitted flip flops made it past the “wear good shoes” warning I called out in the hurried five minutes prior to leaving the house. They fell off three times in the half mile walk to the first bus stop. I didn’t keep counting for the remaining five miles.

Not essential? A backpack full of three kids’ library books. Yes, we did choose to go to the library, but that was before I learned that books gain weight the longer they are carried.

This is in no way an urban community. But a bus makes it feel a little more so. Riding the bus to a downtown or other commercial area, looking for something fun to do, something good to eat and a park to enjoy made us see that there’s a lot more interesting people and places than we had noticed before.

Riding the bus also makes the community seem smaller. We started as the only ones on the bus when we boarded in the morning. (The kids shouted “We’re the first ones!”like we had won.) But it didn’t take long for more to join us. Even if other riders aren’t the interacting type, the kids found ways to connect – like eavesdropping on passenger conversations. They had expletives to prove it.

So as we learned these new words, shared smiles with other pedestrians, talked to our bus driver, and walked from one state to the other, we learned our community is full of unexplored places and can’t wait to get back on the bus to discover more.