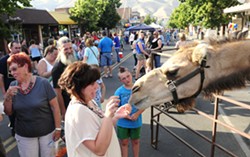 Izzy the camel gets a little to close for comfort for Jessica Davidson of Clarkston as she tries to feed him at Clarkston Alive After 5 in 2011. Lewiston Tribune photo
Izzy the camel returns to downtown Clarkston Thursday for the first Alive After Five outdoor street fair of 2012.

Live music, food and entertainment are planned from 5 to 8 p.m. on Sixth Street downtown. Alive After Five will take place every first Thursday of the month through September.

For kids balloon artists Slinky the Clown and Sir Pops a Lot will also be on hand.

The Clarkston Valley Art Center will open the show and sale "Horsing Around" in conjunction with Alive After Five. The free opening is from 5-8 p.m. at the center at 842 Sixth St.  Fundraiser raffle tickets for "Kelly Creek," an original painting by Clarkston's Larry Ferguson will be for sale.

Alive After Five is sponsored by the Lewis Clark Valley Chamber of Commerce.

Colfax Festival of Trees can be viewed from outdoors