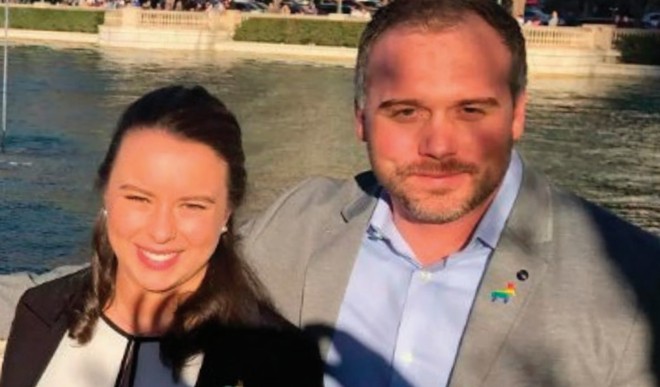 That’s my top-secret spy name. The formula to create a spy name was taught at a billionaire’s spy school near Cody, Wyo. The spy who divulged this scrap of tradecraft — Cat Debreu.


To me, Cat was just a regular person until last year when The New York Times reported that she was a spy planted at the Wyoming Democratic Party, where I was the boss from 2017-19.


It was February 2019. Under fabulously false pretenses, Cat started volunteering at the state party office in Cheyenne. She was a fit 20-something with shoulder-length black hair pulled back so tightly it added an inch to her forehead. Aside from her youth, the most notable thing about Cat was her indifference to an off-election year’s inaction. Picture her perched on a chair unperturbed, half-smiling. A friendly stray off the street.


Her cover story? Cat claimed to be a girl-power warrior sworn to defeat the man behind the Twitter handle @realDonaldTrump. She seemed legit. She knew, for instance, that Dems welcome rants about how it’s crazy to get cooked by a slow-roast climate calamity because you think it’s cool to gulp disinformation brewed in abandoned labs of out-of-work cigarette scientists on oil company payrolls.


Why bother putting a secret agent in a Democratic office? Fair question. Let’s face it: There are more white buffalo sightings in Wyoming than elected-Dem sightings. Look at it this way: Even a primitive logging road will lead you to a lumber mill. In this case, the destination was national Democratic leadership.


Cat, I should mention, wasn’t battling us wicked Dems alone. Her spy-partner-in-crime was Beau Maier. I met him once, for as long as a handshake lasts. He was twitchy, a musclebound, tattooed, ex-Army dude whose grip nearly turned my fingers into diamonds. Beau was posing — with suspicious competence — as a wild-eyed marijuana legalization enthusiast.


So, the spy duo traveled Wyoming’s red rural roads to access a blue superhighway packed with politicians, Political Action Committees, “dark money” groups and think tanks. Once there, they hoped to steal the kind of information that can slow or wreck millions of dollars in campaign work. A good spy can steal seats.


During her time, Cat infiltrated a high-dollar-donor progressive group called Better Wyoming. She and Beau ponied up $20,000 to mingle with big shots at the 2020 Democratic Presidential Primary Debate in Las Vegas. They gave money to Arizona U.S. Sen. Mark Kelly, suggesting he was a target. They did plenty more.


Who were they gathering information for? The New York Times fingered former British MI6 agent Richard Seddon as the one who trained the operatives at Erik Prince’s Double E Ranch near Cody, Wyo. Prince is the billionaire founder of the military company Blackwater; his sister was President Trump’s education secretary, Betsy DeVos. Seddon had financial support from Gore-tex heiress Susan Gore, who lives in an ultra-rich tax haven named Jackson, Wyo. Another fun connection? Beau is a nephew of radio conspiracy theorist Glenn Beck.


Note: My research suggests that Double “E” doesn’t stand for egomaniacal, evil, espionage or Erik, but most likely it stands for his parents, Elsa and Edgar Prince, who bought the ranch in the early 1990s.


Her Real Name is Sophia Caterina LaRocca. One day, Cat told me she had lied about her name to hide from an ex-lover, imprisoned for stalking. (Her fake name was her middle name and her mother’s maiden name.) Cat’s counselor, she said, told her to use her real name again to reclaim her power. And, Cat said, she was dancing again. She was healing. Not being a monster, I offered to help her if I could. I was happy to advance her goal of becoming a fundraiser for Dems.


Don’t be too impressed with the spies. It’s easy to mark Democrats, like me, as suckers for a sad story. After all, who spends energy and emotion trying to elect Democrats in bright red states like Wyoming and Idaho? Not folks who lust for power and fortune. Dems care about people. Dems have guts. Bullies don’t scare them.


So, I don’t care that I was conned by a woman claiming to have been betrayed by someone she trusted. Sure, it’s disgusting that a few folks with more money than decency weaponised our more virtuous impulses against us. But the thing about bullies is that they never stay standing for long, not when people have the guts to stand up to them.


In June 2019, I moved back to Idaho. I had no idea I was leaving my friends and colleagues to deal with the little liar. Fortunately, the staff there felt uneasy about her and never gave her full access to proprietary data. Then, just shy of the 2020 election, Cat and Beau dropped out of sight. In 2021, they got hitched a few days after The New York Times broke the story — and Glenn Beck gave a toast at their wedding.


(Unfortunately, none of the phone numbers I found for them worked. The couple haven’t commented for any stories about them in the past year.)


In the end, aside from a fascinating run-in with lowdown high-dollar treachery, I didn’t take much away from the experience. I already knew there’s no shortage of rotten folks in politics. I did learn that top-secret formula behind Sophia/Cat’s spy name, though. And, I enjoy sharing the formula with friends.

So, what’s your top-secret spy name?


Ferguson, a Lewiston-based writer, can be reached at Deanf2015@gmail.com.

That gets you Arthur Brown. What’s yours?