Gourd heavens! How to pick, carve and preserve the perfect pumpkin

WSU's pumpkin patch is open to the pubic Saturday, Oct. 5.

And if you’re going to play with ribbed orange cucurbits, there’s no better place to start than the ground on which they grew. And so it is that many of us, especially those with children, make the yearly pilgrimage to the pumpkin patch.

Local patches are just opening, with WSU’s organic farm holding its annual Harvest Festival this Saturday, Oct. 5 (details below). Though the pumpkin patch is only open this one day, they manage to clear out most of their pumpkins at the event.

For those looking to visit a patch some other time, five acres await you at Wilson Banner Ranch outside Clarkston.

Pumpkins are simply winter squash with a fancy name, selected from hundreds of other varieties as our seasonal icon. Typically the pumpkins grown in patches are well-suited to be jack-o-lanterns, with a thick stem, deep, hollow inside and a thin rind that’s easy to cut through with a knife.

At the WSU patch, the pumpkins are cut from the vine, waiting to be eyed from afar. They’re turned and thumped and eventually selected. Pumpkins range from perfectly round and orange to oddly shaped and unevenly colored. Because each person comes to the patch with a slightly different list of desirable traits, there’s no predicting what pumpkins will leave the patch first.

“People will get an image in their head of what they do with it. They’ll pick ones with unusual stems, splotchy coloring where they’re still green,” said Brad Jaeckel, manager of WSU’s organic farm. “I’m always amazed at what people pull out of the patch,” he said. “That’s the fun of U-pick.” 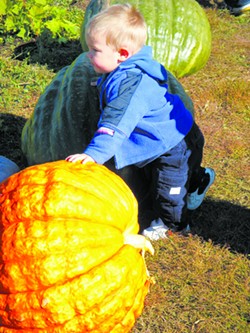 While patch pumpkins might lack the glow of perfection — or is that wax and fungicide? — they offer something a grocery store generally can’t: the ever-desirable giant pumpkin. Pumpkins in stores tend to be uniform and relatively easy to lift into a cart … and there are no carts at a pumpkin patch.

“We’ve got some big ones out there,” said Keri Wilson, of Wilson Banner Ranch. “That’s why people come early, they want to get the big one.”

When you’re looking for a pumpkin this early in the season, it’s important to check for anything that might compromise the integrity of the gourd: look for soft spots and make sure the stem is well attached. But the best thing you can do to preserve your pumpkin? Absolutely nothing.

“Wait as long as you can until you cut them,” Jaeckel advises. “As soon as you cut them, the clock begins ticking.”

When it does come time to cut, Wilson suggests cleaning off the outside of the pumpkin with a soap-and-water solution. After the pumpkin is gutted and carved, the outside can be sealed by applying a thin coat of olive oil, and the inside — as long as you don’t plan to eat it afterwards — with a bleach-water solution.

“You’re basically treating it like a cut flower,” Wilson said. “You’re not going to stop the rotting, you’re just going to slow it down.”

if you go What: WSU Organic Farm Harvest Party When: 10 a.m.-4 p.m. Saturday Where: Tukey Horticulture Orchards on the corner of Airport Road and Terre View Drive in Pullman Cost: Free Additional info: Free activities include hay wagon rides, face painting and games. Pumpkins are sold by weight and wood-fired pizza and fresh-pressed cider is also available for purchase.  Tukey Orchard will also be open for U-pick and pre-picked fruit sales. All purchases must be with cash or checks. Please leave pets at home.

The Wilson Banner Ranch pumpkin patch, 16397 Highway 12, west of Clarkston opened this past week and is accessible during farm hours, 9 a.m. to 5:30 p.m. Tuesday through Saturday and 11 a.m. to 5 p.m. Sunday. Staff suggests customers wear good shoes, bring a cart or wagon to haul pumpkins from the patch and leave pets at home.

Five things to do with your pumpkin

Chances are, you can’t do all five with the same pumpkin, but if you get creative you can probably do more than one.

Look at it — Pumpkins store for months, making them a convenient vegetable to decorate with. Just be sure not to let them freeze; once they do, you’ll soon have a pile of orange mush to clean up.

Eat it — Most of us eat our pumpkin from a can, but they’re equally good cut, cleaned and roasted. If you’re set on carving it up, you can still eat the seeds: Rinse them with water, toss them on a baking sheet, drizzle with olive oil and bake at 325 for around 25 minutes. Pull them out before they get brown; the seeds bake faster than the outside hulls. Sprinkle with salt and get to munching. Carve it — This is the season when the masses display their vegetable sculpture skills. Once the top is opened and innards removed, the entire pumpkin is fair game. From classic faces etched with kitchen knives to intricate scenes with specialized tools, jack-o-lanterns are where pumpkins shine. Literally. Paint it — If you’d rather play with paint than knives, break out the spray paint or acrylics. With a brush and some patience, you can give your pumpkin whatever face or design your imagination and fine motor skills will allow. Drop it — Why dropping large objects from tall places is satisfying, we do not know; we just know that it is. Stay on your own property (or get permission to use a multi-story building), use common sense, watch out below, and you too can perform physics experiments that send pumpkin guts to the uttermost parts of the earth … or at least the end of your driveway.