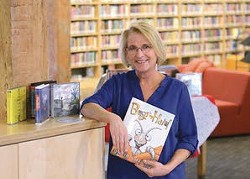 With the rise of smartphones, iPods and other devices, more people are listening to books than ever before, especially young people.

The Odyssey Award recognizes the best audiobook produced for children and/or young adults in the U.S. each year. The American Library Association announces the winner in January - the same time it grants its other major youth book awards, including the well-known Newbery and Caldecott Medals.

Lewiston librarian Heather Stout served on a committee of nine that chose the 2016 Odyssey Award winner. In 2015 she listened to numerous books for children and young adults. Her tally is 49,074 minutes.

“It’s a huge honor,” said Stout, 59, who admits that she jumped and screamed in the library when she found out she was chosen.

Not only was it an opportunity for Stout, it was a boon for the Lewiston City Library and the Valley Automated Library Network. Once Stout’s name was out as a committee member, publishers started shipping books. The library received 599 audiobooks on CD, some with print materials, in total worth $18,300, Stout said. The library plans to distribute titles to every school in the Lewiston School District.

Members of the American Library Association can apply to be on its awards committees. A member of the association for 20 years, Stout had long hoped to be selected. She believes she is one of only a few people from Idaho ever chosen.

The Odyssey Award is about more than just the tale. It focuses on the production of a story, said Stout, assistant director of the Lewiston City Library and its youth programming director. “The story certainly matters but it’s also the voice, the inflection, music and sound effects.”

If a man is reading the part of a 12-year-old boy, is it believable? Does the reader distinguish between characters by changing pitch? Are accents or dialects correct? Does music represent the emotional content of the text? These are a few questions the committee members had to ask.

Stout listened to audiobooks on her commute to the library from her and her husband’s farm between Moscow and Genesee. She downloaded them to her iPod to listen to while grocery shopping. Committee members communicated by email and met in Boston last weekend to choose the winner. Other notable audiobooks can receive an Odyssey Honor. This year one honor was given (see Stout’s recommended listening list).

Audiobooks are good for readers because, like reading a book, they require the use of imagination to see characters and action, Stout said. Some audiobooks come with print materials so that kids can read along.

“What we are noticing is that kids and young adults love the downloading a lot. They’re very popular, very, very popular.”