The casting of “Allied” couldn’t have been more sexually volatile with Brad Pitt playing a dashing World War II officer and Marion Cotillard a mysterious French spy. The script must have been wrapped in asbestos just to get through a scene. 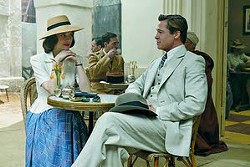 Marion Cotillard and Brad Pitt star as spies who fall in love in "Allied." -- Associated Press

“Allied” also has a beautiful look, with director Robert Zemeckis using modern technology to make the war period look stunningly real. He doesn’t miss a visual cue, from the quiet moments between his stars to a dazzling bombing attack.

Zemeckis finds ways to be visually unique with this WWII piece. The opening scene of Pitt’s character’s arriving in Morocco pulls the audience into the war. And, the director stages the first intimate moments between the spies with a clever whirl.

It’s the script by Steven Knight that fails to live up to the otherwise high standard. Knight, whose past work ranges from the game show “Who Wants to Be a Millionaire” to the sweet drama “The Hundred-Foot Journey,” was a slave to the three-act format.

The first third of the film has Max Vatan (Pitt) and Marianne Beausejour (Cotillard) going undercover in Casablanca as husband and wife. They are there to kill a German ambassador but end up falling in love.

These are two people who are extreme opposites. He’s controlled and quiet; she’s smart and the life of the party. These opposites do attract and once the mission is completed, Vatan wants Beausejour to come to England where they will marry. End of Act 1.

The second act has the couple setting up a home, starting a family and trying to live as quiet a life as possible under the constant threat of bombings.

This is where the audience is introduced to Vatan’s sexually wild sister, Bridget (Lizzy Caplan). Knight tosses in this relative with little to do and completely wastes the talents of Caplan. End of Act 2.

Life is disrupted when Vatan is told that his wife is suspected of being a double agent. She will be tested and if she fails, he will have to kill her.

This is where the story falls apart. It’s difficult to be specific here because that would be a major spoiler. In general, the way the test is structured, it would have been very easy to taint the results. Instead, logic is thrown to the wind and the test moves forward. From that point on, the story seems ill-conceived.

Making this weak moment even more frustrating are the multiple ways Knight could have written around the situation. His decision to go with the weakest point is an insult to the other strong elements of the film.

In general, “Allied” gets strong marks for the chemistry between Pitt and Cotillard, plus the beautiful visuals created by Zemeckis. If you can get past the plot hole, then this is a solid tale of love and war. It’s just such a massive hole it’s hard to ignore. ——— “Allied” Three stars out of four Rating: R (sexuality, violence, language, drug use) Cast: Brad Pitt, Marion Cotillard, Jared Harris, Lizzy Caplan, Matthew Goode Director: Robert Zemeckis 121 minutes