What role does emotion play in violence? This is the rather high-minded philosophical question at the core of the rather schlocky spy picture “American Assassin,” though the film itself doesn’t offer any clear answers on that. It’s difficult to puzzle out any morals about what motivates violence and how trauma manifests when the film just leans into more and more numbingly graphic images of human destruction. 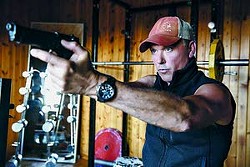 Michael Keaton is shown in a scene from "American Assassin."

Directed by Michael Cuesta with an efficient brutality, based on the book by Vince Flynn, with a script by Stephen Schiff, Michael Finch, Edward Zwick and Marshall Herskovitz, “American Assassin” is like if the evening news threw up on a screenplay, or if every current event coalesced into a single nightmare. It starts with a mass shooting, involves plenty of explicit torture, and ends with Navy destroyers in peril and nuclear bombs in play. Escapist, “American Assassin” is not.

The scrappily appealing “Teen Wolf” and “Maze Runner” star Dylan O’Brien stars as Mitch Rapp, a young man who loses everything in a terrorist attack and becomes hellbent on seeking revenge. The first third of the film, in which he poses as an American jihadi in order to infiltrate a terror cell, is rather fascinating, a portrait of reckless young male energy channeled in all the wrong ways for all the right reasons.

But soon, Mitch has been intercepted and recruited to the CIA, where he is taken to a top-secret, unlicensed training camp marshalled by special forces trainer Stan Hurley (an off-leash Michael Keaton). There, he molds his charges into killing machines via brutal bouts of fisticuffs in the woods, virtual reality taser shootouts, and extremely aggro macho posturing.

Hurley subscribes to an extreme form of training that’s intended to hammer out all emotion from his young proteges. He triggers Mitch’s trauma over and over again while shouting, “You let emotion cloud your judgment. Never let it get personal.” In Hurley’s world, this toxic masculinity, which shuns any expression of emotion or affect, is a way to get closer to reason and purpose through violence and dehumanization. Mitch is just too emotional for that, going rogue on a mission in Istanbul, recklessly acting on impulse.

As we come to discover, Hurley’s methods have some pitfalls. The trauma he inflicts on others doesn’t always result in perfect killing automatons — sometimes it results in deeply damaged and dangerous men, like Ghost (Taylor Kitsch). And as it turns out, Mitch’s emotional motivations for his work do make him a better assassin, if that’s even a good thing.

Though moral questions tumble around “American Assassin,” the film itself relies on so many cliches it can never be trusted to give a truly profound statement. Starting with a classic “dead wife” home video, the film proceeds through training montages and “Bourne Identity”-style European ops missions, complete with a female comrade, Annika (Shiva Negar) to do the requisite empathy and gentle wound dabbing that’s so completely hackneyed by this point. Watching O’Brien violently waterboard her later is not an effective way to upend any female stereotypes.

Ultimately, “American Assassin” proves to be yet another example of Hollywood’s continued valorization and legitimation of psychopathic men, murderers who are presented here as heroes doing official government work. It’s what “American Assassin” reflects about our culture that is far more chilling than anything in the story itself.