What is the hold that “The Shining” has over us, culturally? It’s the popularity of Stephen King, indeed, but it’s also, specifically, Stanley Kubrick’s 1980 film. The surreal and disturbing imagery, the unforgettable performances, and the film’s hypnotic rhythms have woven their way into our collective unconscious and have gotten profoundly stuck there. The cultural grip of “The Shining” is such that it has a stranglehold on Mike Flanagan’s adaptation of “Doctor Sleep,” a sequel of sorts, that it nearly chokes the life out of it. 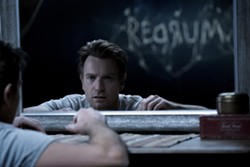 King’s take on what happened after “here’s Johnny” on that snowy mountain is a fascinating follow-up involving an alcoholic Danny Torrance learning to harness his “shine” for good, helping a young girl fight a terrifying death cult, the True Knot. That’s all present in Flanagan’s film, and it’s the most engrossing aspect, comprising the first two-thirds of this two-and-a-half-hour film. It’s when Flanagan’s “Doctor Sleep” is dragged back to the Overlook Hotel that this adaptation loses consciousness.

Ewan MacGregor stars as the grown-up Danny Torrance (Alex Essoe and Henry Thomas briefly play his parents, Wendy and Jack, or versions of them, and bear incredible resemblance to both Shelly Duvall and Jack Nicholson). Dan’s placed his demons in their mental lockboxes and hit the bottle hard, like dad. Disturbing psychic visions drive him to a small town in New Hampshire, where he seeks solace in Alcoholics Anonymous, and a new friend, Billy (Cliff Curtis).

Though his darker thoughts are quelled in sobriety, he can’t fully hide his “shine,” and working in hospice care, he and a psychic cat bring solace to patients at the end of their lives. But it’s when a young girl, Abra (Kyliegh Curran), with a powerful shine, reaches out to him that Dan is put to the test. She’s witnessed the True Knot abduct and torture a young boy (Jacob Tremblay), feeding off his “steam,” his psychic soul of sorts.

There’s such a rich vein of original mythology to be tapped with the True Knot, and Flanagan does flesh out their world with intriguing detail. Rebecca Ferguson is entrancing as cult leader Rose the Hat, drawing the most vulnerable, shiny, steamy prey into her trap. Their abduction and feeding rituals are disturbingly horrific and terrifying, especially considering the young victims. But Flanagan manages to build motivation and understanding (not empathy) for the True Knot, which makes the stakes that much more interesting and complex. Ferguson and Flanagan make Rose the Hat one of the best horror villains of recent years.

What makes “Doctor Sleep” so delightfully chewy are its many complex women, from Rose and her terrifying accomplice Snakebite (Emily Alyn Lind), to the powerful Abra, a girl with a shine so bright, she can astral pro-ject. Though “Doctor Sleep” takes its time ramping up and winding down, a climatic sequence with Abra and Rose facing off, climbing into each other’s minds, is fascinating, and Flanagan visually executes with creativity and clarity.

It’s just that when “Doctor Sleep” ends up back at the Overlook for another “Greatest Hits of The Shining” that the Ambien hits. For all the fresh originality of the first half, why do we have to retread Kubrick’s film again? Leashing the film adaptation so closely to Kubrick’s film is a missed opportunity for this story to realize the full mystical potential promised.