Movie review: 'Once Upon a Time ... In Hollywood'

It’s shocking to say that Quentin Tarantino’s Manson murders film is perhaps his most sedate and self-reflective yet. But maybe that’s because it’s not a Manson murders film. It’s not even a revenge picture. Rather, “Once Upon a Time … In Hollywood” is a rumination on stardom and myth-making, a memo on the cult of celebrity and the narratives we use to process the world around us. Can’t movie magic change these stories? The reality we live in? The film is a bit rueful, sentimental even, which is a new mode for the enfant terrible auteur, and it even casts his most operatic historical fantasy revenge pictures in a new light. 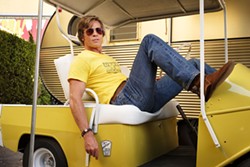 “Once Upon a Time… In Hollywood” is still very much a Tarantino film, chockablock with his obsessions and peccadilloes. His fetishes and fixations are front and center, from the macro (flashbacks nested inside of flashbacks, random voice-over narration) to the micro (lots of bare female feet). Tarantino’s camera obsessively points out every detail of the period-specific production design, whole swaths of Los Angeles dressed to the nines in its very best 1969 duds. He wants to show it off, each poster, tchotchke and perfectly designed beer can.

The nearly three-hour film has a lively (enough) pace because Tarantino can’t stop showing off each detail, the radio and records crackling, the TV blaring, offering a constant blanket of background white noise. We are in Hollywood after all, where it all happens, where the movie stars are your neighbors.

Early in the film, one of our protagonists, Rick Dalton (Leonardo DiCaprio in fine and funny form), a movie star teetering on oblivion, has a heart-to-heart with producer Marvin Schwarzs (Al Pacino) about what it means to be a hero or a heavy. Rick used to be a hero, the star of a TV Western, “Bounty Law.” But now he’s a TV heavy, chauffeured to set by his best and only friend and stunt double, Cliff Booth (a soulful Brad Pitt). Marvin urges Rick to think about how that will make audiences see him. Isn’t it time to go to Rome and make a few spaghetti Westerns where he can be a hero again?

While Rick plays one on TV, Cliff is the real hero in the film, but there’s a conflict. He’s a heavy simultaneously. Cliff’s a stoic, inscrutable man, but a good man, we think (and hope). But there’s no denying his capability for violence, and his murky past. However, in “Once Upon a Time… In Hollywood,” the real heavies are the hippies, seen most often as scantily clad sirens hitchhiking around town. When Cliff offers a ride to a winsome hippie gal he’s seen around (Margaret Qualley), dropping her off at Spahn Movie Ranch, the film becomes a horror movie. The menacing and downright mean Manson girls slowly gather like zombies, or birds on a wire, scary enough even without their Charlie.

This may be Tarantino’s most soul-baring and sensitive film yet, mediated as it is through so many layers of film fandom: old film trailers, classic LA movie theaters, large format one-sheets, trinkets, technology, the daughters of Hollywood heavyweights who populate the cast. However, it’s also his most conservative film. Aligned with Rick and Cliff, relics of days gone by, Tarantino glibly demonizes the hippies to justify his own seemingly predetermined ending, and the sentiment turns to smirk in a Grand Guignol giallo-style splatterfest.

If you can take a bird’s eye view on the get-off-my-lawn good old boy mentality expressed here, it’s Tarantino coping with a changing world, pretending he can preserve something in amber, where pretty girls are just pretty girls and heroes stay heroes forever. Through the symbols of the characters, he tries and fails to turn back the clock, moving the pieces around his Hollywood board game in this lovingly rendered fantasy, which is a fantasy, nonetheless.