Movie review by Jake Coyle, of the Associated Press

We seem to be shooting our best movie stars into outer space with alarming frequency. George Clooney, Sandra Bullock, Matthew McConaughey, Matt Damon and now Jennifer Lawrence and Chris Pratt have all been rocketed out of the stratosphere. Perhaps they’re trying to make the best impression possible with alien life forms. Maybe they’re seeking to colonize new worlds of moviegoers. In any case, the stars have never looked so starry.

And the movies — “Gravity,” ‘’Interstellar,” ‘’The Martian” — have been among the best blockbusters in recent years. Space isn’t just the last frontier; it’s the new Western. 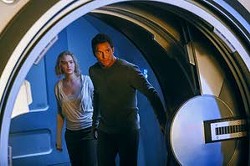 Jaimie Trueblood/Columbia Pictures/Sony via AP
In "Passengers," Jennifer Lawrence and Chris Pratt play two passengers of a spacecraft traveling to a distant colony planet and transporting thousands of people. But a malfunction in the ship's sleep chambers results in the two being awakened 90 years early.

But in Morten Tyldum’s “Passengers,” Pratt and Lawrence have been handed a faulty flight log. Pratt plays Jim Preston, one of a few thousand people in suspended animation on the Aurora, a spiraling starship hurtling through space on autopilot, headed toward a distant colonized planet, Homestead II. But after a particularly big asteroid dings the ship, Preston’s pod opens 30 years into a 120 year trip. He’s a bear woken from hibernation too soon. Despite his efforts to restart the process, hitting the snooze is out of the question.

For anyone who has found themselves unreasonably wide awake in the middle of the night, Jim’s nightmare will have a ring of familiarity. But his math is grimmer. With 90 lonely years to go, he’s essentially been roused to his death. The otherwise desolate ship is his coffin. Jim goes through various stages reconciling himself to his fate. He pleads with the ship’s corporate-speak computers. He busies himself playing basketball and chatting with a robot bartender, Arthur (a chipper Michael Sheen), who has curiously been programmed to polish glasses and lend a sensitive ear to any customers for the decades-long journey. His art-deco bar is modeled after the one Nicholson frequented in “The Shining,” an altogether more potent examination of the horrors of isolation.

After a year, Jim’s gaze turns toward the sleeping passengers. One catches his eye. Who should be there, locked under glass, but Jennifer Lawrence. Later, the film’s other late-arriving character (Laurence Fishburne) will give voice to the movie’s sexist, sleeping beauty fantasy. Of Jim’s good fortune at having such a mate while lost in space, he simply remarks, “Damn.”

The decision — tantamount to murder — is a cosmic mix of creepy, amoral and understandable. And it’s a credit to Pratt’s expansive good-naturedness that “Passengers” doesn’t completely torpedo at this moment. Lawrence, too, is such a great screen presence that we can almost simply enjoy the pair speeding through space. But the thinness of her character only furthers suspicions of the film’s questionable gender politics.

A creepy courtship follows, though neither Tyldum nor Pratt is much interested in pursuing the darkness at the center of its premise. Tyldum, the director of “The Imitation Game,” has a handle on the science-fiction gloss of the tale, thanks partly to the sleek if familiar production design of Guy Hendrix Dyas.

But Tyldum fails to reconcile the central twist of Jon Spaihts’ screenplay with the lighter tone he’s seeking — of a big-budget romance in zero gravity. The vastness of space, here, has been reduced to sitcom size, with none of the ruminative investigations that characterize the genre’s finest films, like “2001: A Space Odyssey,” "Solaris” or "Interstellar.”

There’s room in the galaxy for less thoughtful forays into deep space, especially ones that pair such engaging actors. But what has ultimately self-destructed in “Passengers” is its central metaphor. It’s about how the act of falling in love dooms companions to a single fate, sentencing them, for better or worse, to a lifetime together. It’s a clever enough conceit, doomed by a bungled meet cute.