Review by Jake Coyle, of the Associated Press

Hollywood, in its infinite irony, has resurrected a tale about the unholy perils of resurrection.
The mean roads and mangy cats of Stephen King’s “Pet Sematary” are back from the dead in Kevin Kölsch and Dennis Widmyer’s vividly acted, blandly condensed remake of Mary Lambert’s 1989 movie, adapted from King’s 1983 novel. Bringing back “Pet Sematary,” of course, needed no mystical burial grounds. Horror is selling big at the box office, and “It,” the last big-screen remake of King’s work, made a killing.

King famously voiced trepidation about what he unearthed in “Pet Sematary,” a book he has said — in perhaps a clever bit of publicity — that he initially put away in a drawer, thinking he had “gone too far.” 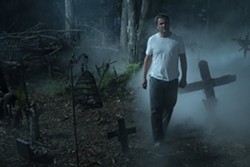 But the book is a kind of perfect summation of King: equal parts schlock and Poe-grade gothic terror. If the new “Pet Sematary” is solid enough, it’s due in large part to the sturdiness of its source material: a darkly honest New England parable of grief, pulled from King’s own fatherly fears.

Working from a script by Jeff Buhler, the directors make quick work of the first act. Within minutes, the Creed family — father Louis (Jason Clarke), mother Rachel (Amy Seimetz), 8-year-old Ellie (Jeté Laurence) and toddler Gage — is driving up to their new colonial home in Ludlow, Maine, and Ellie is ambling into the nearby pet cemetery. Its name is accidentally misspelled by the kids, who solemnly parade their dead dogs and cats there, most of them victims of the Orinco oil tankers that whoosh menacingly through the woodsy town.
It would be wrong to say that this “Pet Sematary” is neutered; like the book, it’s substantially and movingly predicated on the theme of confronting death. Rachel, for one, is haunted by the earlier death of her sister, Zelda, from spinal meningitis. When the family’s pet cat, Winston “Church” Churchill, is found dead on the roadside, Louis and Rachel debate whether to tell Ellie, who will surely be crushed.

Rachel, coaxed by a belief in heaven, and Louis, a rational doctor, differ on the afterlife. But they ultimately agree to tell Ellie that Church just ran away. If only the parents of the current college admissions scandal had first watched “Pet Sematary.” A cautionary tale like this might have brought home for them the danger of sparing your kids the truth.

When the Creeds’ friendly neighbor Jud Crandall (John Lithgow) that evening helps Louis to the cemetery for Church’s burial, he leads Louis deeper into the woods to an ancient burial place. Louis goes along with it. The next day, to Louis’ surprise, Church is back — Ellie’s confrontation with death avoided — but the now far-crankier feline has unsurprisingly picked up a slightly different demeanor on account of having been raised from the dead.

Things get worse from there. The speeding trucks will claim another victim, although not the same one as in the book. The twist is of little solace; tragedy comes just as surely, as does Louis’ misguided temptation to deny it.

It’s not plot deviations from King’s novel that hamper “Pet Sematary.” It’s that, from early on, Kölsch and Widmyer, rely less on the detailed accumulation of atmosphere that King built his tale on, than jump cuts and music cues to build suspense. It puts “Pet Sematary” on a more familiar genre track. Zelda, seen in flashbacks and medicine-cabinet apparitions, is rendered so hideously that it’s its own kind of avoidance: turning her into a ghoul is to turn a blind eye to human suffering. As muscularly as the directors handle the big moments, they let the small ones go missing.

King had something more disturbing in mind. The author, who penned the script for the original film, insisted then that the movie be shot in Maine, the thick-wooded wellspring of King’s nightmares. This “Pet Sematary” was made in Montreal. Though a seemingly minor difference, it really amounts to a heart transplant. By the film’s final scenes, “Pet Sematary” has been reduced, subtly but substantially, into a more standard-issue zombie movie.

Still, I wouldn’t want to level the tale’s most lingering line — “Sometimes dead is better” — on this “Pet Sematary.” The actors are too good. Seimetz’s grief is too palpable; the father-daughter relationship between Laurence and Clarke too tenderly tragic. I guess even when slightly mutated, some stories are just too hard to say goodbye to.