'Rogue One’ is a dark, exhilarating blast

“Rogue One: A Star Wars Story “ seemed suspicious on paper, like any film saddled with the dreaded “spinoff” label. For a while all the odds looked stacked against it too — reshoots, script changes and a director in Gareth Edwards whose last blockbuster, “Godzilla,” had visual flair but no humanity, not to mention the fact that the film would be asking us to learn a dozen new characters with strange names, none of which were Skywalker or Solo. And of course as with any franchise there’s that ever-present knowledge that, in some ways, this is another line-item on a corporate profit sheet. 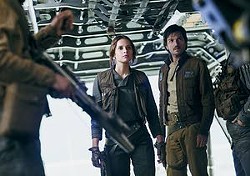 As it turns out, those should-be liabilities were only assets in the end. “Rogue One” is a bold and stirring adventure film that will have both fans and casual observers spellbound. It is easily the most exciting blockbuster in recent memory this side of “Mad Max: Fury Road,” and that includes “The Force Awakens,” which now looks lazy and bloated with sentimentality and fan service in comparison to the subversive ingenuity of “Rogue One.”

How refreshing it is to have a truly contained film that doesn’t have any objective beyond the story at hand. There is nothing to advance, nothing to tease, no “maybe we’ll find answers in the next movie in two years” here. It is just allowed to be what it is, which is an intense and visually engrossing powder keg of a film.

It’s a simple idea, really: Who are the rebels who stole the plans for the Death Star? That pivotal action kicked off the original “Star Wars” and it’s pretty inherently dramatic.

Loosely, “Rogue One” is rooted around the plight of Jyn Erso, whose father Galen Erso (Mads Mikkelsen) is a scientist who once worked for the Empire. He gets drawn back in by the ambitious Orson Krennic (Ben Mendelsohn) to help finish the Death Star, leaving Jyn, played by Beau and Dolly Gadsdon as a young girl, and Felicity Jones as an adult, to survive on her own. Jyn is sort of raised by a rebel extremist in Saw Gerrera (an over-the-top Forest Whitaker), but much of this is left both unseen and unexplained.

What we know is she’s a child of war, and an almost apathetic one at that, until she’s rescued from imprisonment by a group of rebels hoping her familial connections might help with their efforts against the Empire. There she’s put together with a deadpan droid K-2S0 (Alan Tudyk) and a spy, Cassian (Diego Luna), who’s given a secret mission within the mission. Eventually they meet the blind Jedi Chirrut (Donnie Yen), his decidedly more practical companion Baze Malbus (Wen Jiang) and the conflicted pilot (Riz Ahmed), forming a motley crew of unlikely heroes.

The real feat of “Rogue One” is that Edwards and screenwriters Chris Weitz and Tony Gilroy create a world with actual stakes, making the audience feel for and worry about characters we’ve just met. It doesn’t rely on decades-old nostalgia, although there is a bit of that too in mostly unobtrusive ways. There’s also some CGI that veers pretty dramatically into the uncanny valley. But like the somewhat slow and disjointed beginning, eventually it all just washes over you, especially as the riveting action kicks in, taking you from the trenches to space and back again. The only downside of the thrilling battles in the third act is that it means less time with the leads — especially Jones, Luna and Mendelsohn, whose performances make up for the script’s occasional deficiencies.

“Rogue One: A Star Wars Story” is one of the best Star Wars films ever made. Only time will tell if it will surpass “The Empire Strikes Back” as the franchise standard bearer. There’s a compelling case to be made.