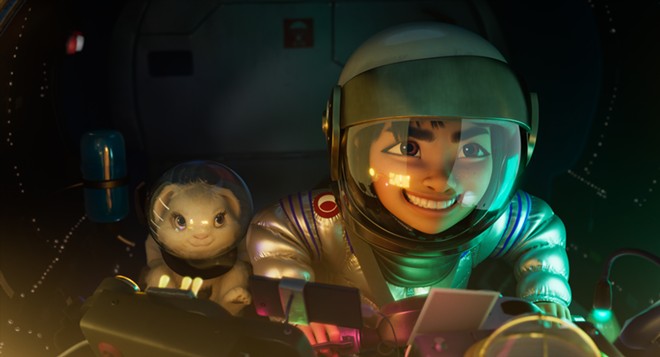 Netflix’s latest animated adventure, “Over the Moon,” offers stunning visuals and a heartfelt story on the level of a Pixar film.

“Over the Moon” showcases colorful animation and a magical and mystical world, similar to Pixar’s “Coco.” It tackles heavy themes of grief and loss, like Pixar’s “Up.” And just like Pixar’s “Inside Out,” it does it all through the perspective of a girl -- in this case a teen -- who is dealing with big changes in her life.

Fei Fei (voiced by Cathy Ang) decides to build a rocketship to the moon to find proof of the existence of the moon goddess, Chang’e (voiced by Phillipa Soo).

All this change is hard for her to handle, and she comes to the logical conclusion that, if she can convince her dad the moon goddess is real, he will remember that love is eternal, so he won’t need to remarry. After all, the immortal Chang’e has been longing for her mortal true love for 3,000 years.

“Over the Moon” shines in animated delight as Fei Fei blasts off, with Chin as a stowaway. The landscape of the moon shifts from traditional gray, black and dusty, to vibrant hues of blue, pink, yellow and red of the lunar city created by the goddess. The wardrobes also feature dazzling colors and range from modern looks to traditional Chinese dress.

“Over the Moon” is a delight to the ears as well. The film is a musical, giving it a Disney vibe as well. While the lyrical arrangements aren’t as clever as some Disney classics, the songs add emotional depth for characters to explore. It also doesn’t hurt that Soo, who played Eliza Hamilton in “Hamilton,” brings her vocal prowess to the role of Chang’e.

The emotional themes of loss and change are really where the movie lets it all out. The songs and dialogue give characters realistic human emotions.

All this also makes “Over the Moon” a must-see during the pandemic. The characters are extremely relatable as they navigate how to grieve and accept change. Fei Fei’s lament of “I wish things could go back to the way they were” will connect strongly with audiences. The film validates the feeling of loss, while recognizing change is needed to move forward. A difficult task for a person to do, much less a film.

If you need a film to help you cry a little but ultimately make you feel good, “Over the Moon” is the perfect pick.