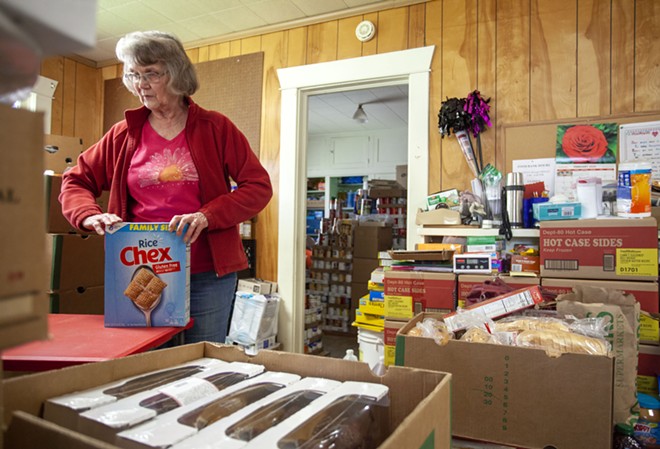 As layoffs sweep across the country, food banks remain a bastion of food security and local support. With close to 10 million Americans reporting the loss of a job in the second half of March, people are searching for help wherever they can find it. Linda Nickels of Moscow has been running the Moscow Food Bank for more than 26 years and continues to provide a helping hand to those in need.

The eldest of nine siblings and a native of Uniontown, Nickels studied at the Providence Sacred Heart Medical Center School of Medical Laboratory Science in Spokane before working as a nurse in Seattle. After living in Texas, Germany, Maryland and Missouri, Nickels found herself back on the Palouse teaching preschool in Moscow. The former director of the food bank, a childhood family friend, approached Nickels and told her she’d be perfect for the job. Nickles decided to go for it, but first received a warning.

“A friend of my husband’s told me: ‘Don’t start that stuff, because you’ll be doing it until you die!’” Nickels said. “I don’t know, we’ll see.”

In an interview with Inland 360, Nickels talked about her continued work through the crisis and what has guided her over more than two and a half decades at the helm of the Moscow Food Bank.

You’ve been running the food bank for 26 years. How have things changed while you’ve been in charge?

LN: When I started it was really small -- only four to nine customers a day. Over the years, it has done nothing but grow. We used to have a lot of people from around the county come, back before there were other food banks, and a lot of people got used to coming to Moscow. I think a lot of the increase comes from the cost of living going up over all these years while wages have not.

What are things like on a day-to-day basis these days?

LN: You never know how many people there are going to be. I try to keep it stocked as best I can and be up for whatever happens.

How have things changed at the food bank during the COVID-19 crisis?

LN: I thought we would be busier, but I’m wondering if some people don’t know that we are still open. I get calls from people who think we shut down like everybody else. We’ve had quite a few new people come, and a lot of the people who are coming are in more need than usual.

How have you kept going for so many years? What motivates you to keep showing up after all this time?

LN: You know, I like a challenge. We do food baskets at Thanksgiving and at Christmas which are dinner baskets that include everything you would need for those holidays. We would always think, how could we do it better next year? My husband Don would be saying, “We need to quit this.” Then in the next breath he’d say, “Well, what can we do to keep this problem from happening next year?” and we would already have next year planned. So then you do it, and you try to improve every year.

Do you have any advice for people trying to stay committed to a goal or an intention?

LN: Personally, knowing right from wrong. I have certain principles that I don’t alter. If I know that this is the right thing to do, I’m not going to change my way of thinking just because someone influences me to do so. Just ask my previous boyfriends. My mother used to say I was the most stubborn of her nine children. Maybe that stubbornness is what caused me to be able to stick to the things I wanted to do, to not give in.

If people want to help out, what can they do?

LN: Food donations and financial donations are huge for us this time of the year. I tell people that either way helps, it is their choice and we will accept either one. The donations have been helping us out a lot because often (the food donations) are things we use and I can take them straight to the shelf.

With outdoor recreation activities in high demand, parks officials are changing the way they do things this year

Local bookstores strategize to survive COVID-19 shutdown: While social distancing might be easy for bookworms, online sales aren’t the same for owners