Moscow music event will be single-day affair this year 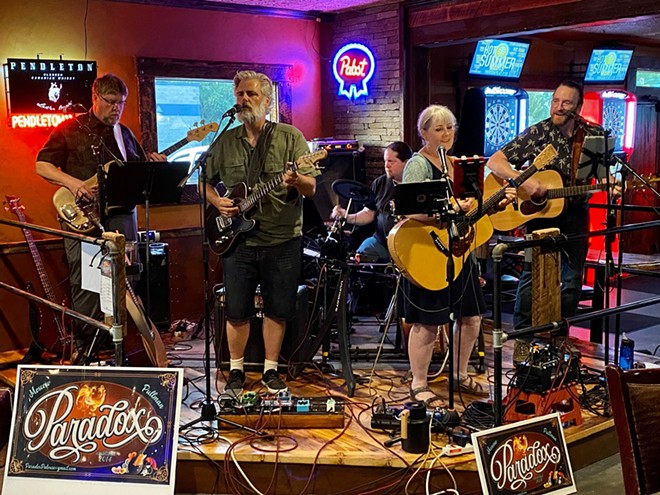 Courtesy of Paradox's Facebook page
The Moscow-Pullman band Paradox is one of several local groups performing Saturday at Rendezvous in the Park in Moscow. The five-piece band performs covers of rock, pop, folk and country music from the 1950s to the present.

Rendezvous in the Park has been a part of the Moscow community since 1992, when it featured artists such as Riders in the Sky, Jack Gladstone and Hank Crawford. It has gained immense traction from community members and musicians, since then.


“We have national acts come through here, and they’ll rave that it’s one of their favorite places they’ve ever played,” said Tom Preston, co-president of the nonprofit group that organizes the event.


After a hiatus last year because of COVID-19 restrictions, the festival is set to return Saturday, July 24, for a modified one-day event, with a variety of performances from local and regional musicians.


Preston said that COVID-19 interfered with fundraising and organizers’ ability to book groups that are touring or from outside the area, which ultimately led them to plan a one-day event as a compromise.


“What we try to do with our programming is have a variety of music styles,” said Preston. “Then we reach out and contact various bands to see if they’re available. This year, we have some cover bands, some originals, some mixture, really something for everybody. No matter what time of day you show up, you’ll see a good act.”


There will be a selection of food and beverages for sale, as well beer and wine. A section at the front of the stage will be reserved for anyone who wishes to dance.


Preston urges people to attend the event because of its link to the community and the mission the festival serves.


“The people who have been coming a long time know why,” he said. “Our mission is to bring music and the arts to our community. We try to keep the prices reasonable so it’s accessible. This is a great way to begin a return to normal after what we’ve been through in the last few years. People who come out this summer are helping to support us for something really special next year. It’s going to be a lot of fun.”


More information and a full schedule of the events are available online at rendezvousinthepark.com.

Bringing the spirit of Idaho to country rock