In July of 1947, an unidentified flying object crashed near Roswell, N.M. Many people reported the object to be a “flying saucer,” which sparked a multitude of conspiracy theories.

Richard Spence, a retired University of Idaho history professor, plans to examine what happened, and didn’t happen, at Roswell in a talk next Thursday at the 1912 Center. Spence started teaching history at UI in 1986 and retired last year. He specializes in intelligence and espionage history and has written several books, including “Secret Agent 666: Aleister Crowley, British Intelligence and the Occult” and “Wall Street and
click to enlarge 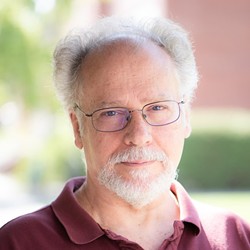 Dr. Richard Spence
the Russian Revolution: 1905-1925,” as well as numerous articles. He also wrote and presented two video series for the college-level video-streaming service Wondrium: “The Real History of Secret Societies” and “Crimes of the Century: A Selective History of Infamy.”

Spence originally dismissed the topic of aliens at Roswell, though he was not completely disinterested. After retiring, he had more time to research the subject and became hooked on the “flying saucer phenomenon.”

While brainstorming potential ideas for a seminar, Spence sought a topic that most people were familiar with. He thought about the Roswell crash and wanted to present a historian’s take on it. Spence isn’t interested in aliens, but rather in investigating the connections between the Roswell incident and the flying saucer phenomenon in history.

“I’m interested in the intelligence and psychological warfare agenda, and what were basically cults associated with it,” he said.

There has been a lot of mythology surrounding Roswell, he said. He doesn’t want to examine it with the intent of debunking it, but rather go back and look at the initial reports: the U.S. Air Force memo and the interviews with the man who first found the object. He’ll dive into the nitty gritty of the way the story originally evolved and discrepancies in the stories.

What interested Spence in the broader area of the flying saucer phenomenon was a personal connection he had to a major figure in early saucer groups, George Hunt Williamson. Williamson became influential after Roswell, but eventually faded away, even changing his name and dropping all involvement in saucer groups. Spence met him briefly in the 1970s, under the man’s new identity.

“When I realized these people were the same person, that kind of intrigued me,” he said. “So I wanted to learn more about him, and when I learned more about him, one of the things that began to look more and more the case was that he had some kind of intelligence connections.”

Having a background in spy and espionage history, Spence embarked on a spy hunting journey pertaining to Williamson. As he began to take a look at the entire scope of the subject, he noticed what he called suspicious numbers of people connected to the military and intelligence communities who were involved in the subject.

“I don’t think it’s a coincidence, but I’m still trying to piece it together,” he said.