Cole Quinn
Moscow band Pumice Pocket will play an original soundtrack live during tonight’s screening of “No Country for Old Men” at the Kenworthy.


Marchant answered a few questions about the unusual gig:


Inland 360: What sparked the idea for creating a soundtrack?

Marchant: “No Country for Old Men” is a unique film in that there is no soundtrack written for it. The entire movie is dialogue with ambient sound design. Myself and Criss Ward, our drummer, saw this as an opportunity to get together earlier this year and play along with the movie in his apartment. This was partially inspired by seeing the Invoke String Quartet perform at the University of Idaho and hearing about how they rewrote an original soundtrack for the historically influential animated film “La Planète Sauvage.”


360: How did you get from that inspiration to this public performance?

Marchant: I talked with some of the people at the Kenworthy to see if we could make a performance out of this experiment with the band Pumice Pocket. Starting as a funk/jazz cover group, we quickly started to write more challenging music and recording works this last year. No Soundtrack for Old Men is like something we have never done before, stepping out of our comfort zone to play something that reimagines a piece of film, engages an audience but also doesn’t distract from the themes of the film. This has been very challenging and rewarding for us as an ensemble.


360: What can fans of the movie expect at tonight’s event?

Marchant: Aesthetically speaking, the music will be a departure from the film in many ways. While some of the sounds we create will serve the diegetic environment, we are pulling from other areas of film soundtrack history to put on this show. I have been saying that this film will be like “if Curtis Mayfield was hired to create an instrumental soundtrack to a post-Western noir film.” 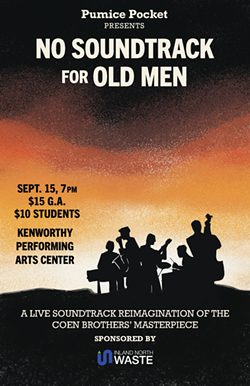 WHAT: No Soundtrack for Old Men, featuring music of Pumice Pocket in conjunction with "No Country for Old Men."