There’s a science behind why people deny science.

Enter Michael Goldsby, a philosophy professor at Washington State University who is working to understand the logic behind why people deny science and the cascade of effects this has on society.

Anyone who has engaged in a discussion with someone who rejects the scientific facts surrounding an argument will feel like they’re “playing a game of whack-a-mole,” said Goldsby. No matter what you say, “they will come up with an alternative that keeps their theory intact.” 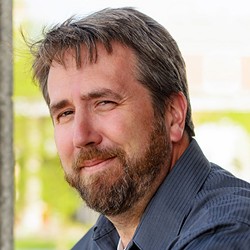 His recent research has shown that this type of reasoning erodes an individual’s ability to make predictions about what is going to happen in the future. For example, someone who believes in the theory of climate change knows that measurable data — such as rising sea levels and retreating glaciers — will confirm their theory and that it would be disconfirmed if the opposite were to occur, he said. “However, somebody who is denying the facts and always coming up with ad hoc hypotheses … they have no idea whether glaciers will retreat or advance, and that’s a problem.”

Goldsby will give the online talk “Why Deny Science” Tuesday as part of the Asotin County Library’s Wine and Wisdom series in partnership with Humanities Washington. He’ll sort through the tactics people use and the reasons they may have for arguing against scientific claims, along with broader social implications relating to policy development.

Goldsby is part of the Columbia Food-Energy-Water Storage Project, a team of researchers working to ensure future resource security in the Columbia River Basin. He said one of the biggest mistakes people can make is to dismiss science deniers as ignorant, uneducated or bad. Psychological research does not back this up, he said. In addition, it leads to unnecessary conflict.

“We can’t vilify people who deny science. I’m not saying they have good reasons but their heart is often in the right place. Vilifying them actually helps them dig deeper into their entrenched position.”