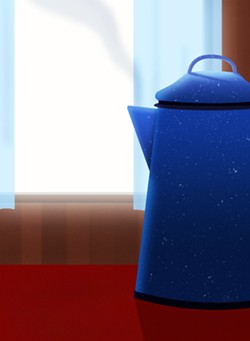 By Tara Roberts For inland360.com

I return to the cabin as the pink of dawn starts to seep between the trees. I nudge the door open and peek inside. Andy, the little Sasquatch, is still snuggled in the bed with his arms wrapped around a pile of quilts, but Jamie is sitting at the table with the lantern on, chugging a mug of coffee from a blue-speckled pot.

“What were you even thinking?” she says as I step inside. “Going out in the middle of the night when there’s a Bigfoot-kidnapping madman out there? When there’s moose and bears and who knows what else? When there’s the Howler?”

“That’s the thing,” I start to say, but she bursts into tears.

“This was the worst idea,” she says. “The stupidest, dumbest idea ever.”

I figure revealing my plan to her can wait. I sit next to her and wrap my arm around her shoulders. “Hey, it hasn’t been that bad.”

“Are you kidding me? You said you wouldn’t have come if I hadn’t made you. And that was before we found Andy and this turned into a giant mess.”

I pour myself a cup of coffee. After a sip, I say, “OK. I did say I wouldn’t have come. But I don’t regret it, Jamie. If I hadn’t come, Andy might still be chained up in that creepy camp. And even if we hadn’t found him, I’d still be glad I came to be with you.”

She wipes her eyes. “Really?”

“Really,” I say. I had plenty of time to think about it while I was out in the dark, carrying out what’s either a brilliant or disastrous plan. I should have been terrified, but I wasn’t. “I’ve gotten so good at making everything into a routine, because it feels safer. But life is still unpredictable. You make it into an adventure. You’ve even managed to make it your job. I’m glad you asked me to be part of it.”

I expect her to cheer up after my speech, but she starts crying even harder. “But I lied to you.”

The coffee suddenly feels like a block of ice in my stomach. “What do you mean?”

She shifts so I’m not holding onto her shoulder anymore. “I said we were coming out here for my big break, for this great story,” she says. “But I got laid off a month ago.”

She rolls her eyes at me and I feel a flicker of rage. “Come on, Seattle TV stations don’t send people out to Idaho to chase weird creatures around in the woods. I made it all up.”

“So we’re out here doing what, then?”

She snuffles and gives me a sheepish smile over her coffee cup. “Trying to launch my YouTube career?”

I know I should feel bad for her, and I do feel bad, but my anger blossoms and blocks out my compassion. “It was going to be a pretty boring video until we found Andy,” I say. “And what, were you plotting to use him, too? Promise we’d keep him a secret but then plaster him all over the internet?”

“I never expected to actually find anything! I just thought it would be some goofy backwoods story — but he’s way more important than the story. Can you imagine all the people stomping around out here looking for him?”

“Yeah, well, you’re already one of them.”

She slumps and covers her face with her hands. Before either of us can say anything else, the door flings open. To be continued next Thursday … Coming next week Part 10: The Arrival

Roberts is a writer and mom who lives and works in Moscow and is very slowly pursuing her master’s degree in English. She can be reached at tarabethroberts@gmail.com.