'This is a human rights issue' 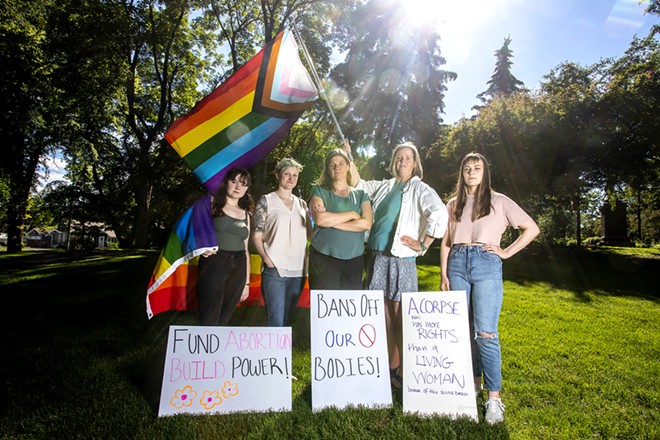 August Frank/Inland 360 File
Members of Bans Off Our Bodies – Moscow, Frances Haycock, from left, Ann Galantuomini, Sara Zaske, the Rev. Elizabeth Stevens and Ramana Gregory stand for a photo at East City Park in Moscow. Not pictured is Lucca Musick.

The organizers of Bans Off Our Bodies – Moscow mobilized in May when the Supreme Court’s draft decision overturning Roe v. Wade was leaked, drawing more than 200 people to a rally on a rainy Saturday. A decision day event in June drew a similar number of protestors. As the country moves forward with a new landscape of varying abortion laws, including a trigger law set to outlaw the procedure in Idaho, the group is focused on continued activism, education and support.

Inland 360 visited with members of the group’s leadership team, which includes Sara Zaske, of Moscow; Ann Galantuomini, of Pullman; Frances Haycock; Romana Gregory, of Moscow; Lucca Musick, of Moscow; and the Rev. Elizabeth Stevens, from the Unitarian Universalist Church of the Palouse in Moscow to learn more about the group’s goals.


Inland 360: Explain a little about what’s at stake.


Sara Zaske: Every day that an abortion ban is in place, it endangers lives. Women get desperate. Suicide, murder by inimtate partners, violence toward pregnant women are real, and the desperate circumstances people feel can be mentally and psycologically damaging. This is an emergency.

We’re already hearing stories from Texas about women with ectopic pregnancies (for whom) those life-saving procedures are being delayed by weeks. These bans are also endangering miscarriage care. Lawmakers who have no understanding of women’s health are making bans. They have this idea that they’re saving the unborn, but what they’re really doing is endangering women’s health.

Planned Parenthood is challenging (the Idaho trigger law set to outlaw abortion), and it’s important to mention for women who might be scared that abortion is still legal in Idaho.


Inland 360: Why rallies, and what else are you doing in the wake of the decision?


SZ: People ask: Why are you bothering to yell about it? Just think for a minute, if we didn’t show up. The very first thing is to show up. A fundamental right is being taken away: (The right to an abortion) is the ability to say what happens to my own body, your own health, and that is trying to be taken away from us by what I believe is a minority. It doesn’t feel like a democracy.

I’m a woman, and a mom of two. It was a gut-punch to me that this is the world I will leave my daughter — and my son. My mother’s generation fought for this, and we’ve taken it for granted that we can have abortion care if we need it.

Putting together a rally, for me it felt like doing something. I know it’s not going to fix everything, but it’s what I can do.

We’re asking people to take whatever action they can: giving money, contacting legislators.


360: Does the turnout you’ve seen for your events so far surprise you?


Ann Galantuomini: The incredible support and turnout from the community wasn’t a surprise to me. We have a phenomenal group of human rights activists in the area and they showed up.

I’ve been most surprised by our social media’s explosive growth. We’ve reached over 12,000 people since our Facebook page and Instagram were created in early May. It is amazing to see our local, grassroots movement become influential in the northern Idaho area.

I hope that the exposure inspires people to join the reproductive rights movement to fight for their own bodily autonomy and the right to privacy.


360: The term intersectionality, referring to the way an issue affects a variety of groups, is mentioned frequently when people are talking about social justice. Can you explain what that means when people are discussing abortion?


AG: I’d like to start by saying this is a human rights issue, not a women’s issue. Abortion bans are an assault on Americans' bodily autonomy and right to privacy. All kinds of people get abortions for all kinds of reasons.

Intersectionality is a tool that helps us talk about oppression and discrimination. It is imperative to understand that abortion bans do not apply equally to everyone. These bans will disproportionately affect Black people and people of color; people with disabilities; LGBTG+ people, including nonbinary and trans people; incarcerated people; and nonChristian people. Already disadvantaged people will plunge further into poverty as a result of abortion bans.


360: How can people who want to get involved or learn more reach you?


AG: We have extensive resources available at linktr.ee/bansoffmoscow, including a list of abortion funds in every state and an abortion resource kit. The link can be found on our Facebook page and in our Instagram bio.

There are several ways to reach us if people are interested in becoming activists or volunteering. We welcome people to reach out on Instagram @bansoffmoscow, on Facebook at Facebook.com/BansOffMoscow or by emailing bansoffmoscow@gmail.com.

Accessibility Matters: The squeaky wheel on the bus

Hot off the press

Celebrating love in the Lewiston-Clarkston Valley