August Frank
Flags fly along a fence line in Lewiston this week in anticipation of the July 4 holiday.

American flags are flying high in anticipation of the Fourth of July, but there are rules for rocking the red-white-and-blue, and it seems not everyone knows them.

The Federal Flag Code is a law that provides guidance for proper handling and display of the American flag. While it contains no penalties for misusing the flag and is not obligatory for the general public, the code specifically outlines how to respect the flag which, “represents a living country and is itself considered a living thing.”

The flag’s status as a living thing is one reason the code states that the preferred way to dispose of one is to burn it and bury the ashes.

The flag is not a decoration, but if you’re breaking any of the following rules, don’t worry, the First Amendment has your back. In 1990 the Supreme Court ruled that desecrating the flag is an act of free speech.

The flag should never be printed on paper products or anything made to be discarded after use, like paper plates.

According to Section 8 of the code, titled Respect for the Flag, it should not be “... printed or otherwise impressed on paper napkins or boxes or anything that is designed for temporary use and discard.” Consider that before you wipe ketchup off your face with that holiday napkin.

The flag should never be used as a marketing tool.

While patriotic spirit may be considered admirable, it’s not if you’re using the flag to attract customers. There are no exceptions, according to the code, which states “the flag should never be used for advertising purposes in any manner whatsoever.”

The flag should never have any letters, words or pictures placed on it.

This provision of the code has led some to question the appropriateness of altered versions of the flag that have appeared in recent years. According to the code, “the flag should never have placed upon it, nor on any part of it, nor attached to it any mark, insignia, letter, word, figure, design, picture or drawing of any nature.” 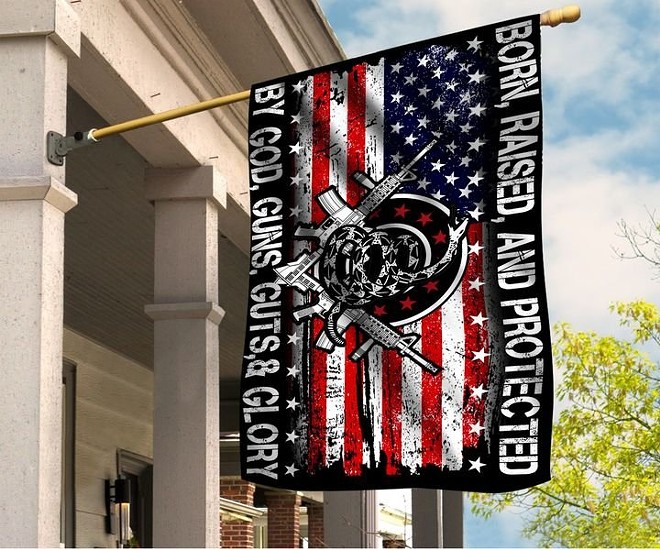 The flag is not for wearing.

Bikinis, pajamas, hats, socks, underwear — whatever article of clothing you desire, you can probably find one with an American flag on it. Americans love to wear their flag, but the flag code might not love them back for it: “No part of the flag should ever be used as a costume or athletic uniform.” The only exception is for military personnel, firefighters, police officers and members of patriotic organizations, who are allowed to wear a flag patch on their uniform. It should be worn on the left lapel, near the heart.


The colors on the flag represent: