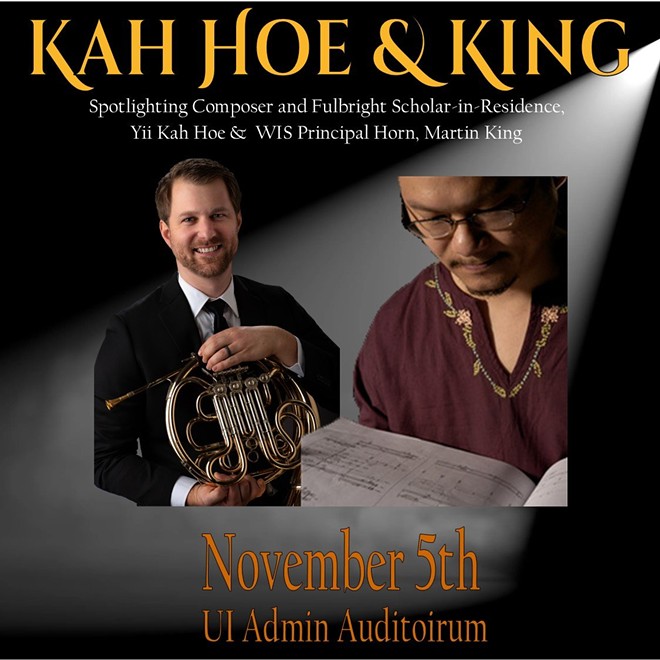 Performances by the Washington Idaho Symphony on Nov. 5 and 13 feature Yii Kah Hoe, a Malaysian composer and Fulbright Scholar at Washington State University, as well as Martin King, assistant professor of horn and music education at WSU.

The Nov. 5 performance, at 7:30 p.m. in the University of Idaho Administration Building Auditorium, is a continuation of the symphony’s 51st season.


The Nov. 13 performance, at the Silverthorne Theatre on the Lewis-Clark State College campus in Lewiston, launches the symphony’s new Chamber Series, “which enables us to bring even more music to our community,” Executive Director Kristin Lincoln said, in a news release. “It is the perfect way to bring more music while highlighting our talented musicians.”


Kah Hoe, an improviser on two Chinese instruments, the dizi and the xiao, teaches music at SEGi College in Subang Jaya, Malaysia. His style blends avant-garde classical music with sounds and rhythms from traditional instruments from a variety of Asian cultures, according to the news release.


The symphony will perform Kah Hoe’s composition “Opening of the Stage for Orchestra,” inspired by Malay shadow puppet tradition, and “The Glass Bead Game, by James Beckel, featuring King as horn soloist. Beckel’s piece draws inspiration from a novel of the same name by Herman Hesse, with the horn representing the main character’s journey.


Tickets for both performances are available at the door and wa-idsymphony.org/tickets or by calling (208) 874-4162. There is a 15% discount for advance tickets purchased online.