Cults where people live communally may be less common today, but cults haven't gone away 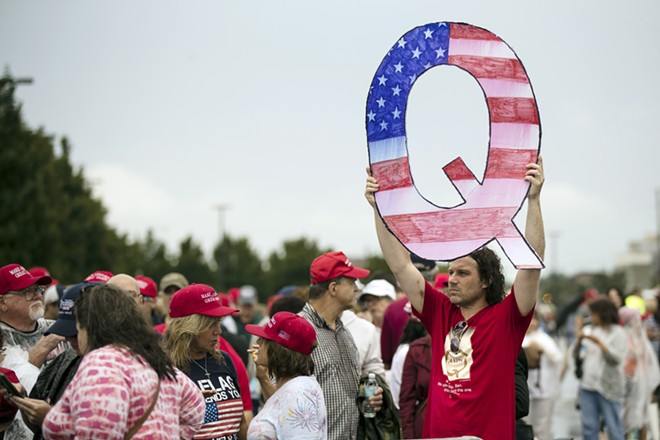 AP Photo/Matt Rourke
In this Aug. 2, 2018, file photo, David Reinert holding a Q sign waits in line with others to enter a campaign rally with President Donald Trump in Wilkes-Barre, Pa. A far-right conspiracy theory formed online has crept into the mainstream political arena. It's called QAnon, and it centers on the baseless belief that President Donald Trump is waging a secret campaign against enemies in the “deep state.”

New religious movements or cults are found around the world and throughout history. The word cult conjures images of brainwashing, abuse and violence, although many of these groups can be fairly benign. What is a cult?

“Defining ‘cult’ is a tough one because the word has so many different definitions,” said Rob Balch, a retired sociology professor from the University of Montana in Missoula.

Balch began researching cults in the 1970s and has done in-depth case studies of groups like Heaven’s Gate. He outlined four common definitions of cults.

1.) A group based on shared devotion to a person, place, object or belief. This could be the Children of God, devotees of the Virgin Mary or fans of Britney Spears.

3.) A small, loose-knit group with unconventional beliefs, with no doctrine and few demands on its members.

4.) A religious group based on ideas that are new and different in a society.

Transforming trauma: Kamiah's Jemima Farris grew up in a cult. Her new podcast features those who find strength within to overcome difficult circumstances.

Although Balch didn’t specifically study the Children of God, he believes it fits the second definition, as did many other cults that began during the same time period. These groups asked people to join on short notice and give up families and possessions to be part of a community with a charismatic leader in a communal living situation.

“The Children of God had a whole different standard of sexual morality,” Balch said.

In the early 1970s, when Children of God and groups such as Heaven's Gate, the Moonies and the Hare Krishnas formed, there were many young, uncommitted people looking for a different way of life.

“In those days, people identified themselves as spiritual seekers,” Balch said.

They were interested in anything outside the mainstream, on the fringe and outside established religions, he said. They were rejecting capitalism, investigating alternative living arrangements and living communally and simply.

Groups like Children of God often attracted people on drugs, he said. Giving up drugs was a condition of joining.

“They helped clean them up, to get high on Jesus,” he said.

Balch thinks that cults where people live communally are far less common today than they were in the 20th century, but that the prevalence of what he calls “audience cults” has increased in recent years.

“The communal living groups have been preempted by online groups,” he said. “(A group like QAnon) is definitely a cult, and not in a good sense.”

Balch describes this phenomena as, “disconnected people who have never met reading the same thing online. They become immersed in these ideas without meeting the other people.”