You fidget, they spin -- introducing the fidget spinner

If you don’t know what a fidget spinner is yet, don’t ask.

Fidget spinners are the latest new craze for school-age kids. It’s a small toy with a bearing in the middle and, mostly typically, three rounded blades -- like a small weighted fan. As the name implies, what it does is spin. And that’s it.

The idea, in theory, anyway, is that kids can keep these in their pockets or by their laps and quietly fidget with them while they sit at their desk and listen or work on a task. It’s supposed to be helpful for those who have trouble focusing or need an outlet for nervous energy.

I’ve reached the age that my kids are a good source when it comes to learning about the coolest new stuff. I asked my 10-year-old daughter if she knew anything about fidget spinners. Her face lit up, she hopped onto my lap and begged to get one.

I asked her what kids do with them and she said, “They’re like gum, only for your hands.” She cupped her hands together and wiggled her fingers around as if to demonstrate.

Then she asked again. “Can you get me one? For your story?” She knows how to get what she wants, at least.

At less than $5, it wasn’t the expense that was holding me back. I just didn’t know where to find one, except off Amazon -- and we don’t have Prime, so chances are the trend would be over by the time it arrived. I’d heard fidget spinners were more likely to be found at obscure locations like gas stations, but with hot items like this, you need real time info.

Enter social media. I got on Facebook and asked about them, and within a couple hours, I found out what local stores had them in stock, where I could find homemade ones, reports about which schools allowed them and which didn’t, why they’re good, why they’re bad and articles about injuries they can cause.

It’s not just a hot item, it’s a hot topic of conversation, centering largely around whether or not these things should be allowed in school. Kendamas, the wooden cup-and-ball toy that was all the rage a couple years ago, were clearly a toy. But fidget spinners claim value as a therapy tool, which only fuels the controversy.

Allen Hancock is a sixth-grade teacher at Centennial Elementary School in Lewiston. Last week he posted an article on his blog about how to keep fidgets from taking over the classroom and within 24 hours, the post had 25,000 views. It appears the subject is of national interest.

He’s not exclusively for or against their use in the classroom, but if therapy items like fidget spinners are used, he expects it to improve focus and allow students to better participate.

He first noticed fidget spinners in the classroom at the end of April, maybe early May, he said. They became popular quickly. Hancock attributes part of the appeal to the active nature of the object; it’s fun and draws attention. This is different from most therapeutic objects, he said, which tend to be tactile rather than active. Tactile objects are not only quieter, but in his opinion, more effective for students who need sensory outlet.

I wanted to see one for myself. The day after asking around on Facebook, I went out to track one down. By then my location data was half a day old and I wasn’t sure it was still good. I started at Albertson’s in Clarkston. There were no campout lines or Black-Friday style mobs to direct me to where in the store I might find these things. Nor is there a fidget spinner aisle. I wandered for a bit wondering how to categorize fidget spinners. Were they party supplies? Toys? School supplies? Maybe hanging strategically in the wine aisle? Or would it be with the coffee?

Finally I gave up and asked a store employee. He laughed, like we were sharing an inside joke -- and I guess we were, but I think maybe I was the butt of it -- and directed me to the checkouts. There they were, stacked in a box right in front of the checker.

Buying one was a group discussion. The grandma after me in line had never heard of them -- I told her if she bought one it would make her cool. Then the mom ahead of me in line uttered that sound that moms make when they’re about to pull their hair out. Her son had one, she said, and though it was supposed to help him focus, it seemed to have the opposite effect. The checker and bagger weighed in with fairly safe, neutral statements.

I bought my spinner and walked out of the building an officially cool person. I’m a moderate fidgeter -- pens, rings and cell phone cases usually do the trick. When I flipped the spinner around, I can’t say it did anything for me. But I earned some points with my kids when they found it waiting for them after school. It took a few short minutes for a fight to break out, and a bit later, the item to fly through the air and hit a window. So I would say the thing definitely works -- in terms of annoying parents, anyway.

But we have one, so we’re cool. At least until the next thing comes around. 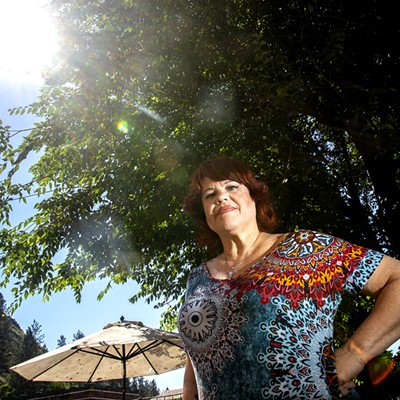