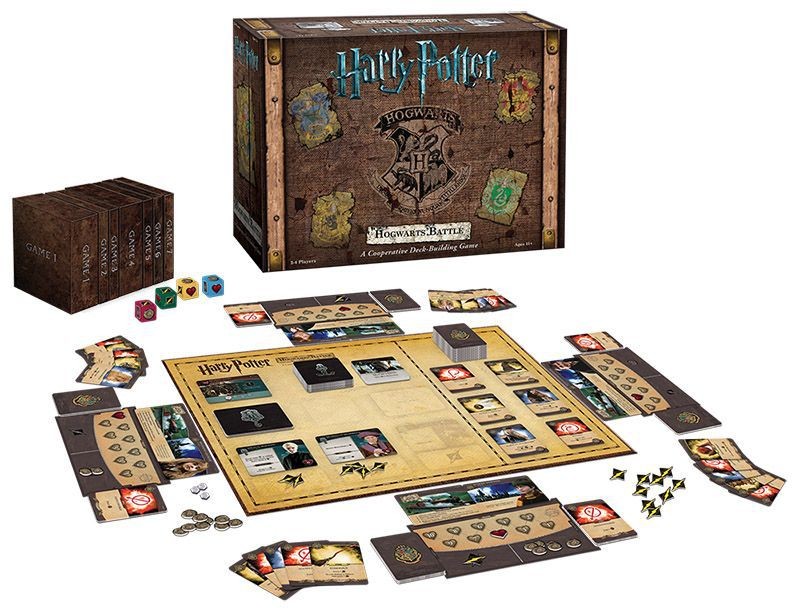 In 1997, J.K. Rowling released the book “Harry Potter and the Sorcerer’s Stone” and took the literary world by storm. Over the next decade, readers enjoyed following Harry, Hermione, Ron and Neville on a grand adventure to stop Voldemort and save the world. While reading the books is a great way to experience the Harry Potter universe, fans of the series will be delighted to hear there is a thrilling tabletop game that lets you take on the roles of the main characters and battle your way through the events of the series.

Harry Potter: Hogwarts Battle (age: 11+, 2-4 players, 45 min) is a cooperative, deck-building game that grows and develops with each play. In the game, players take on the role of Harry or one of his friends and work together to try to overcome the game-driven villains.

Inside the game, there are a series of boxes numbered from one to seven, each representing one of the books in the Harry Potter series. Players start by opening the first box, which contains the basic cards and rules for the game. A few pages of simple rules lay down the basics of the system and within minutes you are playing. The team must work together to defeat the villain. Once that has been accomplished, players open up the next box. Inside, they will find new components and a few additional rules to add to the gameplay.

The rules of Harry Potter: Hogwarts Battle are quite simple. Each player takes the role of a hero and receives that character’s specific deck of cards. On your turn, you will play cards from your hand to either attack the villain or to buy more powerful cards from the market, which are placed in your discard pile. After you have played the cards in your hand, you draw up again. When your deck runs out, you shuffle your discard pile and restart your deck. In this way, purchased cards make their way into your hand to allow you to better able to battle the game’s villains. After your turn is finished, then the player must run through the enemy steps, where the villain card gives instructions on how the game attacks the heroes. Because the opponents are pretty tough, the only way to win is for players to work together.

What adds to this game’s fun is the way that the story evolves with each play. Just as the characters in the novel grow up, the heroes also develop game to game from lowly magic students into mighty wizards. The game has been crafted to walk the players through the Harry Potter storyline, but it’s more than simply reading about your favorite heroes on an adventure: the game allows you to participate inside the world of Hogwarts.

Although the game is simple enough to be grasped by children younger than 11 years of age, the challenge of the later chapters may be too difficult for younger players. By the time you reach the fourth box, the game will require strategic moves that will test the cleverness of even an adult muggle. Each level may require several attempts before players are ready to move on to the next box.