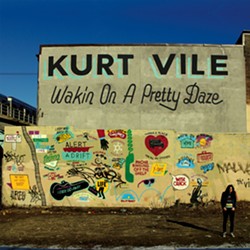 By DYLAN BROWN of Inland 360

The best-of lists are as numerous as Kanye West’s references to himself as a god on “Yeezus.” But what the Sack Lunch Mixtape’s Top 10 albums of 2013 lacks in West idolatry it makes up for with angry folk music, London greasers and a wise stoner.

10. “Psychic,” by Darkside Modern electronica distances itself from other genres’ focal instrument, the guitar, but Darkside puts it to use with spell-binding effect. Devil-from-the-bayou blues are perfectly offset by Nicholas Jaar’s meticulous, spacey symphonics. Top pick: “Paper Trails”

9. “The Worse Things Get, the Harder I Fight, the Harder I Fight, the More I Love You,” by Neko Case Keep your fans and terrify critics who labeled you as quaint, which is what “The Worse Things Get” did for Case. Darkly brooding on our animal instincts and childhood trauma, Case’s punch in the gut to her “bullies,” proved she’s not “the runt of the litter.” Top pick: “Wild Creatures”

8. “If You Wait,” by London Grammar Hannah Reid’s winter wind of a voice chills to the bone, but her warm, low tones keep her audience from freezing over. Oft compared to their role models in melancholy, the xx, the band’s synth provides a sparse backdrop that Reid engulfs with her voice. Top pick: “Hey Now”

7. “Repave,” by Volcano Choir Indie-folk darling and Grammy-winner Justin Vernon set aside Bon Iver, but picked up Volcano Choir. He kept the slightly deranged song-smithing — “the honey bin the bunny’s in is telling you there’s a countdown” — and rides his falsetto over waves of guitar sounds from members of two post-rock bands. To pick: “Comrade”

6. “AM,” by Arctic Monkeys The still-utterly British rockers trend darker with their best album since their first. The songs carry more weight, plus some added hair wax and black leather. They remain bitingly clever, but the guitars grind harder than before. To pick: “Do I Wanna Know?”

5. “Tomorrow’s Harvest,” by Boards of Canada The publicity-averse duo’s first full-length work in eight years sounds like the aftermath of nuclear war as envisioned by whoever wrote the score for 1970s-era PBS documentaries. Using analogue sounds from old National Film Board of Canada productions — the genesis of their name — they transport listeners into nuclear winter. Top pick: “White Cyclosa”

4. “Settle,” by Disclosure Skyrocketing to the top of the EDM world at ages 18 and 21, Guy and Howard Lawrence have club knowledge beyond their years. “Settle” is the rare set list that functions beautifully as an album. In a genre of quick hits and back-beat, the brothers are unrelenting and spirited throughout their debut. Top pick: “Latch,” featuring Sam Smith

3. “Pedestrian Verse,” by Frightened Rabbit Before the world was browbeaten with Mumford and Son’s arena-folk, they were like Frightened Rabbit. Not to say they are the same — Frightened Rabbit’s edgier songs have more clanging guitar and less banjos and syrupy sentimentality. Yet, they harness the same grandiose emotions to fill the void left by your teenage sister’s favorite band. Top pick: “The Woodpile”

2. “Woman,” by Rhye Neither crass nor prude, Rhye’s debut is a revelation for love songs. Overtly steamy, but dry-cleaned smooth, Michael Milosh channels, as in embodies, 1980s’ diva Sade —  “Smooth Operator.” Jazzy horns, synth and strings set the mood for those seeking what Milosh called the things that really make them really happy, “intimacy and being loved.” Top pick: “The Fall”

1. “Walking On A Pretty Daze,” by Kurt Vile Despite a propensity for 5-minute-plus songs, the man born with a name ready-made to tell the tales of America’s disenfranchised, wanders but is never lost. A simple man roaming with his relaxed guitar, Vile has the rough-cut wisdom of Jack Kerouac. His comforting West Coast lo-fi is heart-felt — unassumingly the best album of 2013. Top pick: “Girl Called Alex” ——— Brown may be contacted at dbrown@lmtribune.com or (208) 848-2278. Follow him on Twitter @DylanBrown26.