Spending a day with local rockhounds 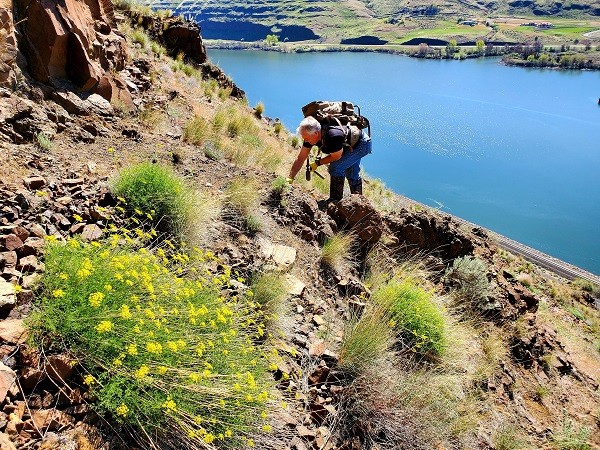 On a sunny mid-April morning, Lewiston’s Randy Squires and Darren Tolman set off on a treasure hunt up the steep and rocky breaks along the Snake River outside Clarkston.

They weren’t seeking buried gold, but gems and minerals. Squires and Tolman are rockhounds, collectors who search for rocks to bring home to clean, cut, polish, display or sell. The men are members of the Hells Canyon Gem Club, which has a three-day show and sale starting Friday in Lewiston. They agreed to let me come along on the hike for a story, but not before trying to warn me away: We’d be in steep, rough, treacherous terrain on basalt cliffs with rattlesnakes, cacti and scorpions.

“We have scorpions here?” I asked.

Squires later sent me a photo from a past hike as proof.

On the ride to the site, Squires, who is president of the gem club, told how he was introduced to rockhounding. In 2010, he and his wife were shopping in an antiques store along Lewiston’s Main Street. The shop owner also sold rocks and gems, and Squires walked out with a star garnet and the owner’s encouragement to go out and find his own. Outside of India, Idaho is the only place in the world where star garnets can be found.

The Hells Canyon Gem Club is a nonprofit social club established in 1956. Squires learned from old timers and other hobbyists there about where to look and what to look for. They told him of a railroad tunnel outside Culdesac with a long vein of opal and how quartz crystals could be found scattered across a certain field on the Camas Prairie. He investigated and found the tales to be true.

“I decided that was my kind of treasure hunt,” he said.

While Idaho is named the Gem State, it doesn’t have lots of gems, but it does have many interesting minerals, he said. On the day we went out, we were looking for Snake River jasper, agates, common opal and Fryite, a type of chalcedony known only to exist in the Lewiston-Clarkston Valley. It is named after the late W. A. (Abe) Frye, the Lewiston rockhound and former Nez Perce County Sheriff’s Office chief deputy who discovered it. Squires showed me polished examples of what we’d be looking for. Snake River jasper is tan or deep shades of green, like the color of the river. Fryite is composed of dynamic layers of brown, black and white. They were hoping to find both, but Fryite is more rare. Jennifer K. Bauer
Fryite jasper was discovered by the late W.A. (Abe) Fry of Lewiston and is only found in the Lewiston-Clarkston Valley. These three pieces were found, cut and polished by Squires.

I asked how to know what to look for since the rocks we would be seeing were in their raw form, their natural beauty not yet brought to the surface by polishing.

“Look for a rock that doesn’t look like the other rocks,” Tolman said.

We arrived at the location, a hill on private land Squires had permission to explore. He gave me a pickax, and Tolman handed me a ski pole to use as a walking stick. I was soon using both to climb the nearly vertical hillside. Loose rocks shifted under our feet, sometimes sweeping them out from beneath us. Falling down was inevitable. As we slowly made our way up, the men scanned the rock falls for specimens that stood out, occasionally calling out about finds. 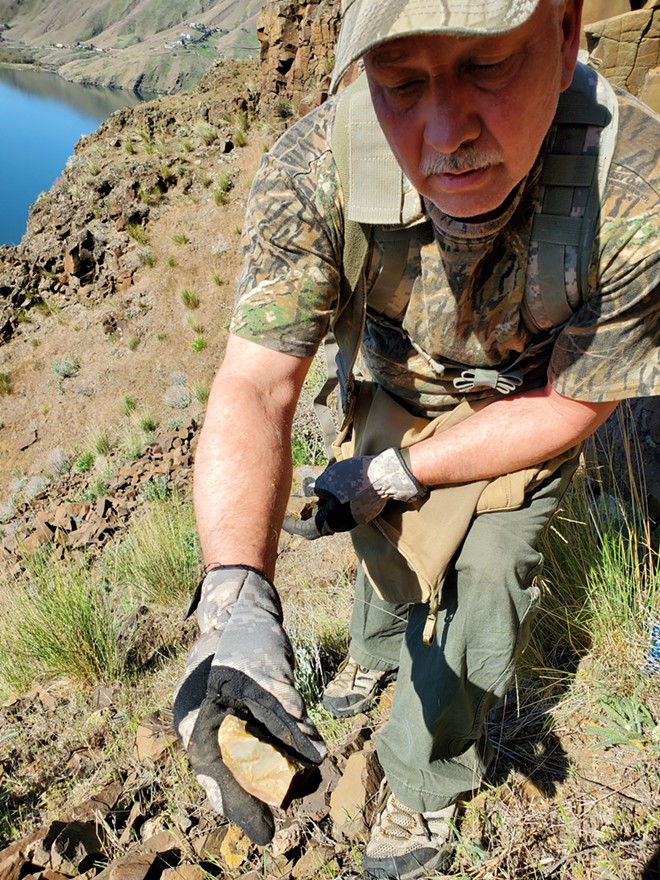 Jennifer K. Bauer
Darren Tolman, of Lewiston, talks about rocks and minerals, including jasper and common opal, that can be found along the breaks of the Snake River.

Spring is a good time to look for jasper, Tolman told me. “This time of year, jasper boils up to the surface.” Rocks also tumble downhill in spring as the earth thaws and something formed thousands or millions of years ago is revealed to the sun for the first time.

With practice, my eyes began to pick out rocks that stood apart from the others among the black basalt and lava rocks. Some of the day’s biggest finds were discovered inside basalt, like a piece of Fryite that Squires handily removed with his pickax.

Jennifer K. Bauer
A close up of Fryite discovered amongst the basalt Friday.

Going back down, we weighed more than we did going up, with backpacks and pockets laden with finds. We spread out our haul on the tailgate of Squires’ truck, admiring each other’s discoveries. It was a successful day. Yes, we found several rocks we’d been looking for, but we’d also enjoyed the sights and sounds of nature, and no one required rescue by Life Flight.

Jennifer K. Bauer
An assortment of green Snake River jasper was among the rocks found on last week's hike.

Squires asked me what I’d learned that day.

“It takes a lot of work to find pretty rocks,” I answered.

But it was an adventure to be remembered. If it’s the kind of adventure that calls to you, you could consider joining the Hells Canyon Gem Club. Club representatives will be at the Inspired by Nature show Saturday. You can also find out about the club online at hellscanyongemclub.com.